Eights off to a flying start

Australia’s Women’s Eight won their heat today (Wednesday) at the 2018 World Rowing Championships to progress directly to Sunday’s A-Final. The crew, stroked by Emma Fessey, powered over the line in a time of six minutes two seconds, while their male counterparts finished second in their heat to also book a place in Sunday’s A-Finals.

Meanwhile, Maddie Edmunds won her repechage comfortably to progress to Saturday’s A/B semi-finals. The PR3 Men’s Pair of Jed Altschwager and James Talbot, in their preliminary race, finished third and will race their A-Final on Saturday morning in Bulgaria. Australia’s Women’s Eight took on the reigning World and European Champions, Romania, as well as 2017 World Championships bronze medallists, New Zealand, and Great Britain. With a fast start from Romania, coxswain James Rook urged his crew on and at the 500 metre mark the Australians had a slight lead.

The Australians then powered up another level and took a half boat length lead over New Zealand who were in second, with Great Britain in hot pursuit. With Australia still in the lead in the final 500 metres, just two seconds separated the chasing crews, Rook called on his crew to up their rating to 38 and they crossed the line ahead of a chasing Great Britain who had overtaken the Kiwis.

Post-race, Jacinta Edmunds of the Women’s Eight said, “We went into the race without any expectations, I think our mind set was ‘It’s a 2000 metre piece, let’s execute it as well as we can we’ll work from there’. I think where we ended up was very exciting but we’ve got to keep working and pushing on for the A-Finals.”

The 23-year-old made her Senior Australian Rowing Team debut today and was pleased to have had the opportunity to race but also to progress through to the A-Final.

“It was pretty exciting to be out there today. I think either way, if you make it straight to the final, or go to the rep, you’ve got some benefits. If you go to the rep you’ve got an extra race under your belt and some more opportunities to work on your race plan, but I think for us, having made the A-Final, it means we can just go back to our good, steady training that we’ve had and set ourselves up for the race on Sunday.”

Australia’s Men’s Eight needed a top two finish in their heat to progress directly to the A-Final. Taking on the USA, Great Britain, Canada and New Zealand, it was the USA and Great Britain who were fastest out of the start, but Australia pushed ahead of the British, before the 500 metre marker, and chased down the Americans who were in the lead.

As the crews crossed into the third quarter, coxswain Kendall Brodie called on the Australians who made a further push and took the lead over the Americans. As the crews approached the final hundred metres, the sprints began with Angus Widdicombe taking the Australians to 45 as they crossed the line in a photo finish with the Americans. It was the USA who took the win, just 0.05 of a second ahead of the Australians, who in turn had set a new Australian Men’s Eight best time of 5 minutes 19.25 seconds.

Coswain, Kendall Brodie said post qualifying for Sunday’s A-Final, “It was exciting for me to be lining up for my first World Championships race in the green and gold, it’s an honour to be representing Australia.

“I think we put together a good race and an exciting race where we were toe-to-toe with the US, right to the line for a photo finish.” 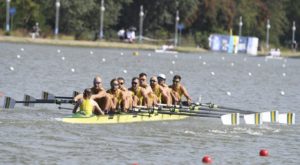 The winning US time of 5 minutes 19.20 seconds, was just 0.52 of a second off the World’s Best Time, with the Australians just 0.57 seconds off the record.

“To come so close to the World record was pretty exciting it was pretty fast conditions out there. We hadn’t raced the US before and it’s interesting to see where other crews are at since Lucerne. It’s positive to see our consistency in training has paid off for us with the result to day. There’s plenty for us to build on from this race and it’s good to know that there’s more we can get out of the boat.”