Australia’s Men’s and Women’s Fours will both defend their World Championships titles this weekend, after progressing into Saturday’s A-Finals in Plovdiv Bulgaria. Also locking in A-Finals today (Thursday) were the PR3 Mixed Coxed Four and the Men’s Quadruple Scull.

Elsewhere, the Men’s and Women’s Lightweight Single Sculls, the Lightweight Women’s Double Scull, the Women’s Quadruple Scull and the Women’s Pair  all progressed to B-Finals. The Men’s Pair and Men’s Single Scull will contest C and D Finals, respectively, after racing today at the 2018 World Rowing Championships.

The Men’s Four were fastest out of the start in their semi-final, leading the race from start to finish. The crew of Alexander Hill, Jack Hargreaves, Spencer Turrin and Joshua Hicks, held off a last ditch challenge, in the final 200 metres, from the Dutch crew, to ensure they finished in first to book a place in Saturday’s A-Final.

Australia’s Women’s Four were slow out of the start in their semi-final, sitting back in fifth at the 500 metre mark, with the USA in the lead. However, the reigning World Champions held their pace and moved through the pack. 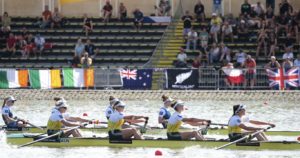 As the crews approached the final 300 metres, Molly Goodman upped the Australian boat’s stroke rate and the crew made its move on second placed Russia and began to challenge the USA. With 100 metres to go, the Australians were in second but had run out of water to take the win from the USA, but no matter as the crew progressed to the A-Finals.

In a thrilling Men’s Quadruple Sculls repechage, Australia’s crew of David Watts, Alex Purnell, Campbell Watts and Caleb Antill put in a solid performance, holding off challenges from 2017 World Champions Lithuania, and New Zealand, to cross the line in first, in a time of 5 minutes 42 seconds.

“After the heat we knew we could be in the mix, Lithuania obviously won the World Championships last year, while New Zealand have the experience of Olympic gold medallist Mahe Drysdale in their crew. We always knew we’d have a good race on our hands. We wanted to execute our best race plan and it paid off today, it’s probably the best execution we’ve done so far, which is exciting leading into the final,” admitted David Watts.

“I’ve been in a few non A-Finals over the last few years, in crews that had potential, but just didn’t quite make it. Today I just felt confident, I had the guys behind me and it feels good to be in an A-Final. it’s a good feeling to be back where you think you belong after all the hard yards that you put in to the sport,” added the West Australian. The Men’s Quadruple Scull at the line (Copyright Rowing Australia)

The PR3 Mixed Coxed Four put in a sterling effort in their repechage, with the Australians putting together a poised race to win and progress to Saturday’s A-Finals. The crew of Nikki Ayers, Alex Vuillermin, Ben Gibson, James Talbot and coxswain Renae Domaschenz made a steady start, in cooler conditions, to then take a clear water lead at the halfway mark.

“I think we’re all pretty stoked with today’s result and to make the A-Final. With the crew changes we’ve had coming into the regatta and Alex having to step up to replace and injured Kate (Murdoch), it’s all been really positive. I really feel it’s worked out well and we’re clicking at the right moment,” admitted the stroke of the crew, James Talbot.

“Our plan for the race was to get out in front, we had a good start the other day and today we wanted to up the rate and tidy up a few things that we weren’t happy with from our heat.

“To have been at the #Train4Tokyo camps around nine months ago and now be in two A-Finals at the World Championships, in the PR3 Men’s Pair and the Mixed Coxed Four, it’s pretty awesome” added the Australian. The Women’s Quadruple Scull of Genevieve Horton, Caitlin Cronin, Rowena Meredith and Olympia Aldrersey sat in Lane Three, taking on Romania, USA, China, Great Britain and Belarus. The Australians were back in fifth at the 500 metre mark but the crew kept calm and began to work their way through the pack.

With China leading, and Great Britain and USA in second and third, the Australians chose to make their sprint in the final 500 metres and nearly had the Americans at the line, by the USA surged at the line to take third and forcing the girls in Green and Gold into the B-Final.

The Women’s Pair of Hannah Vermeersch and Addy Dunkley-Smith had a tough semi-final featuring the reigning World Champions, New Zealand, as well as an inform Canada. The young Australian pairing placed fourth in the race, despite a sprint for the line to try and steal third place from China, and will now contest the B-Final on Saturday.

Amy James and Sarah Pound featured in the fourth semi-final of the day for Australia – in the Lightweight Women’s Double Sculls. The crew had a strong start and were challenging for a top three finish in the middle part of the race, but a sprint from the race leaders saw the Australians slip back to sixth. The crew will now contest the B-Final.

Hamish Parry finished fourth in his semi-final of the Lightweight Men’s Single Scull, with the Queenslander now set to race the B-Final over the weekend. Meanwhile, Alice Arch in the Lightweight Women’s Single Scull took on Tunisia, Italy, France, Belarus and Germany in her semi-final. The Victorian sculler finished in fifth place and will now contest Friday’s B-Final.

A spirited race from the young Men’s Pair in their quarterfinal saw the duo lead for the first three quarters of the race, only to be overtaken in the final 250 metres by their competitors, to finish fourth. The Pair went on to contest the C/D semi-final, finishing first and will now contest the C final.

In the Men’s Single Scull quarterfinal, Luke Letcher finished just outside the progression, in fourth, and also contested a C/D semi-final finishing fourth, the Canberra-local will now contest the D final.