In addition to the gold medal today, Australia’s Women’s Four snapped up a silver medal, while the Men’s Quadruple Scull put in an incredible race to take home a silver medal. The PR3 Mixed Coxed Four wrapped up their debut World Rowing Championships with a fifth place finish.

In a tight A-Final, the Australian Men’s Four powered out the start and were at 50 strokes per minute to get ahead of their competition. Australia crossed the half way point in the lead, with a virtual line forming behind them between the remaining crews. Italy then did a huge push in a bid to close down the Australians, coached by Ian Wright, but the boys in the green and gold were flying.

With Italy fast approaching, along with the finish line, Hill upped the Australian stroke rate to 43 and the World Champions protected their title by 0.25 of a second. “It was a good race; we’ve really stepped up through the regatta. We weren’t really happy with our heat, but we got better in our semi and ultimately in the final. I have to say full credit to the other crews who pushed us all the way, but we’re extremely happy to win the World Championships again, it’s been a great year,” said Jack Hargreaves.

Australia’s Women’s Four of Molly Goodman, Sarah Hawe, Katrina Werry and Lucy Stephan faced off an in form United States as well as Denmark and Russia. The Australians, coached by Tom Westgarth, had a good start, and were chasing the USA, who were in the lead with the Danes and Poland hot on their heels. In the final 500 metres, Goodman upped the Australians rating to 41 in a bid to push on the USA, but there was a sprint up the outside from the Russians to contend with too. The Australians held off the challenge for second and claimed a silver medal, while the USA took gold.

Post-race, Lucy Stephan said, “It was a tough race and it’s great to see how much the competition has stepped up since last year. I’m really proud of the girls and credit to the USA for how they raced. This is only the second year of the Olympiad and, ultimately, we’re building towards Tokyo.”

The Men’s Quadruple Scull, coached by Mark Prater, wrapped up the A-Finals for Australia today and did so in style. In a tight race, it was Ukraine, the holders of the World Best Time, who came out fastest but by the halfway mark Italy had nipped into the lead, with little separating the rest of the field, just two seconds. Australia began to move in the second thousand, with stroke seat David Watts upping the rating and the Australians moving into fourth.

As the crew approached the final 250 metres, they upped their sprint, to chase Italy and stave off an attack from New Zealand and Ukraine, to cross the line and win a silver medal in what was a photo-finish for the line. 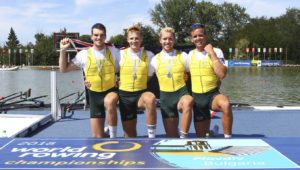 “I think we all had the belief we could do it and we really put out a good race. We knew we would be in the hunt for a medal if we were in contact with the leaders at the halfway mark, which we were. I couldn’t believe what the result was when we crossed the line, I’m so over the moon,” added Alex Purnell.

“Everything just came together today, it’s just hard to believe my first time at a Senior World Championship, I get to win a medal, it’s a really special thing. It’s only a very small group of people who have won a medal at a World Championship, and I’m proud to be one of them. Couple that with to stand alongside the history of Australian rowers is just amazing, I can’t wait to receive my McVilly-Pearce pin and be part of the honour roll of Australian rowing,” added Antill. Australia’s PR3 Mixed Coxed Four of Nikki Ayers, Alex Vuillermin, Ben Gibson, James Talbot and coxswain Rene Domaschenz, put in a sterling effort in their first ever World Rowing Championships A-Final. The crew, all of whom made their debut at this year’s event, were amongst the medal positions in the first 1000 metres of their final.

As the crew crossed into the third 500 metres, they were in fourth with Great Britain and USA in the lead and France back in third. Despite a sprint in the final 250 metres, it was a fifth place finish for this promising para-rowing crew.

The B-Finals also took place today with Australia featuring in three. Australia’s Women’s Pair of Hannah Vermeersch and Addy Dunkley-Smith wrapped up their World Championships ranked eighth in the world, after placing second in their B-Final; meanwhile, Amy James and Sarah Pound finished sixth in their B-Final, ranking 12th overall at the regatta in the Lightweight Women’s Double Scull.

The Women’s Quadruple Scull of Olympia Aldersey, Rowena Meredith, Caitlin Cronin and Genevieve Horton won their B-Final in comfortable style to conclude their World Championships ranked seventh in the world.

Jack O’Brien and Andrew Judge wrapped up their debut World Rowing Championships, in the Men’s Pair, ranked 13th in the world, while Luke Letcher finished 19th in the World in the Men’s Single Scull.