Australia’s Erik Horrie claimed his World Rowing Championships title after a spectacular race for the line against Ukraine’s Roman Polianski in the PR1 Men’s Single Scull. In the process of claiming his World Title, the Australian also broke his own World’s Best Time, crossing the line in a time of 9 minutes 16.90 seconds, some 8 seconds faster than his previous World Record.

“This one hurt a lot more than the other four. It’s unbelievable, to get out there and win your fifth world title, it’s hard enough just winning one. This win I think is a tribute to the team I have behind me at this event, my coach Jason Baker, Gordon Marcks the Head Para-rowing Coach, our Performance Director Bernard Savage, all the medical staff, the whole Australian Rowing Team – all week I’ve felt incredibly supported,” said the two-time Paralympic silver medallist.

Speaking of the tough racing conditions, wind had forced a reallocation of lanes by FISA’s Fairness Committee, Horrie admitted he’d needed to rely on sound coaching advice from Baker, saying, “It was a really strong tail, then a very strong gust from the side.

“I knew the work I’d done with my coach in the pre-camp in Varese that it was always going to come down to a sprint and I think that I may have been listening more than normal, as I didn’t doubt myself coming in to that last 250, even a boat length behind. I knew that what I had was enough. I may have left it a little bit tight at the finish but I think my late father-in-law was looking over me and he got me over the line.”

Australia’s Men’s Eight had a nail-biting finish to their race with the crew of Liam Donald, Rob Black, Angus Moore, Simon Keenan, Nick Purnell, Tim Masters, Josh Booth, Angus Widdicombe and coxswain Kendall Brodie staving off an attack from a fast paced British crew to snap up a silver medal behind Germany who claimed gold. 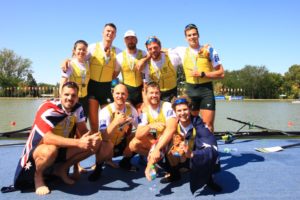 The Australians crossed the line in a time of 5 minutes 26.11 seconds, just 0.03 of a second ahead of Great Britain. Post-race, Liam Donald, making his Senior World Championships debut said, “It’s pretty exciting to have won my first senior medal, and it was a good performance from the guys out there.

“It was a tough start, but the tail wind came in, in the second thousand, and that’s where our fitness paid off to come through and crawl back up the field and push into contention for a medal. We’re really happy to have won a medal, and now it’s about building for next year and beyond.”

Coxswain, Kendall Brodie, added, “It feels incredible to win a silver medal. I’m really proud to represent Australia and I think we did a good job today in some tough conditions. We came together on race day and handled the pressure well.

As the crews approached the final 500 metres, Canada made a move and passed the Australians, but Rook called on his crew to up their rating and they responded. As they sprinted for the line, it was the USA who took the win, with Canada in second and Australia third, with just an eighth of a second separating the Canadians and Australians. “It was an awesome effort from the girls and Rooky did a bloody good job and we could hear John and all the other coaches cheering us on. We’ve got the best support team here and it’s a ripper of an end to the season, we fought hard all the way to the line,” said Georgie Rowe.

“We were super loose and super relaxed, and did a really good job of staying internal. We honestly did a good job of executing our race plan, we had a few hairy strokes but nothing we can’t handle. We’re stoked with the race, we felt we didn’t let any of them go, even with the sprint, the US may have won but they weren’t that far ahead of us,” added Jacinta Edmunds.

Finally, Jacinta’s older sister, Maddie Edmunds wrapped up her World Rowing Championships with a solid victory in the B-Final. The Queenslander led her race from start to finish and concluded her World Championships as the seventh best Women’s Single Scull in the world.