In a career that witnessed iconic success, heartbreak and one of the most courageous performances in Australian Olympic history, Drew Ginn OAM cemented himself as an extraordinary performer during the nation’s most successful period of rowing.

Winning three gold medals and a silver across four Olympic Games, Ginn’s feats will be recognised with induction to the Sport Australia Hall of Fame as an Athlete Member at the 34th Induction and Awards Gala Dinner on Thursday 11th October 2018.

One of Australia’s most decorated Olympic athletes in Australian sport, Ginn also collected five golds, a silver and two bronze medals from eight world championships during an international career that stretched 16 years.

While Ginn’s glittering resume speaks for itself, the 43-year-old is adamant that none of it would have come to fruition without the support and dedication of his teammates.

“We perform as a group, so I wouldn’t be in this position now if it wasn’t for them.” 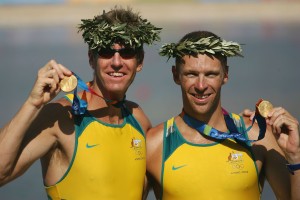 In 2004, the Men’s Coxless Pair of James Tomkins and Drew Ginn claimed gold

“For me it’s not about the individual recognition, because you get to do what you do as a crew, but I know it’s very special to be recognised in this way and I’m very grateful.”

A lean teenager at Melbourne’s Scotch College, Ginn was introduced to the sport by maths teacher Bram McLeod, earmarking the student as a potentially gifted rower.

“He grabbed me at the end of class one day and said, ‘how about you come down and jump in a boat and we’ll look after you?’. I was nervous at first, and of course I fell in, but Mr McLeod persisted and convinced me to come back.”

“I think I fell in love with it because I couldn’t do it at first,” he added.

“On the outside it looks relatively simple, but it was a challenge for me because I came at it late. Plus the team aspect of it all really just was amazing. I had played other team sports, but rowing was on a whole new level.”

Soon realising his gift, Ginn first represented Australia in the eight at the under 23 level in 1994. Two years later as a 21-year-old, Ginn replaced the retired Andrew Cooper in the famous ‘Oarsome Foursome’ at the 1996 Atlanta Olympics, going on to secure Australia’s second successive gold-medal in the event.

“As a young athlete you back yourself in that position, I had a lot of enthusiasm, but I had a great set of mentors in terms of Mike, James and Nick who had been there and I think they recognised that as much as I was enthusiastic and passionate on the outside, I was still just a kid on the inside who hadn’t been there or done it, and they were happy to support me on the way though.”

“The days before the Olympics final were the hardest,” Ginn added. 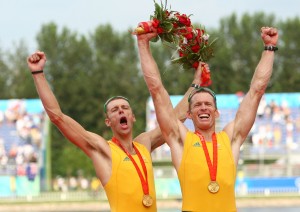 “Sitting on the start line at the final I actually felt quite calm, I was excited, but I was actually pretty confident because I had the guys in my boat. I remember looking out and noticing every other boat had an Olympic champion or world champion, and then I looked in front of me and I had James Tomkins, Nick Green and Mike McKay, and I thought ‘wow, what better team to be a part of?’ – it was pretty special.”

During the lead-up to Sydney 2000, Ginn paired with James Tomkins and dominated internationally. The duo were favourites heading into the home games, but a serious, almost career-ending back injury forced Ginn to withdraw.

Tomkins went on with new partner Matthew Long to win a well-deserved bronze, but the pain of missing out hit Ginn hard.

“I was devasted,” Ginn revealed.

“As a young athlete I thought everything was going to be fine and thought that my body would be able to handle a bigger load, and it couldn’t. It was a massive reality check and at the time it was really hard for me, for my wife, for my friends around me, because everyone goes through it with you.”

“But what it did do is give me a much greater appreciation for the opportunities I would later encounter. I was a lot smarter about training and looking after my body, rather than just letting things go because you think it’ll all be alright in the end.”

Overcoming two years of rehabilitation, Ginn returned to Olympic competition with Tomkins in Athens 2004, going on to win gold in the coxless pair.

He then linked with a new partner Duncan Free in the same event at Beijing in 2008, winning another gold after competing with intense back pain in the final.

In a feat hailed as one of the most courageous in Australian Olympic history, Ginn looks back with bewilderment.

“When I was getting into the boat and sitting down, that’s when it was really uncomfortable. It felt like someone was stabbing a knife into the side of my calf. In the final it just felt like I was on a knife edge and my right leg shut down with about 300-400 metres to go. At the time I could only strap my back and take a Panadol, but there was no real way to mask the pain.” 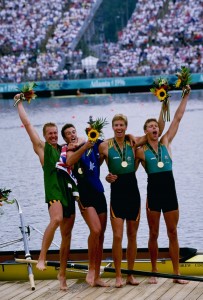 Still not satisfied, Ginn returned for his fourth Olympic Games four years later in London, this time returning to the event where it all began, in the coxless four.

Now a veteran of the team, Ginn teamed up with William Lockwood, James Chapman and Joshua Dunkley-Smith to win a silver behind the all-conquering British crew.

In a career which had seen it’s fair share of ups and downs, Ginn puts down his long-lasting success to a simple motto: “Persistence beats resistance”.

“We all have days where you’re really questioning yourself because you’re no longer rowing with the guys you were five or six years ago. But then you’re with a bunch of new people and you realise for them, it is really worthwhile going through it all because hopefully they can pass that on to their next teammate.”

The persistence, courage and modesty that Ginn showed throughout his career has earnt him praise from Chairman of the Sport Australia Hall of Fame selection committee Rob de Castella AO MBE.

“Longevity, incredible Olympic and world championship results and inspiration are the hall marks of this amazing rower. Drew now joins his Oarsome Foursome brothers as a Member of the Sport Australia Hall of Fame,” de Castella said.

In the sport of rowing, the impeccable synchronicity of the crew is vital to success, and Ginn was Australia’s centrepiece to that. Across a career which traversed teams and Olympic cycles, Ginn earnt himself the reputation as one of Australia’s greatest rowers of the modern era.

Established in 1985, the Sport Australia Hall of Fame plays a vital role in preserving and perpetuating Australia’s rich sporting heritage, whilst promoting the values of courage, sportsmanship, integrity, mateship, persistence, and excellence, all underpinned by generosity, modesty, pride and ambition.

2018 will mark the 34th edition of this event, with eight Australian sporting icons, from on and off the field, to be inducted into the Sport Australia Hall of Fame.

In addition, one existing Hall of Fame member will be elevated to Legend status, becoming the 40th official Legend of Australian Sport.