The Power of Sport

The sport of indoor rowing continues to rise across Australia and globally. In the lead-up to the Australian Indoor Rowing Championships (AIRC), we met with Ben Farinazzo, Invictus Games Sydney 2018 dual-Gold Medallist and AIRC Ambassador.  We asked him to share his thoughts behind the rise of Indoor Rowing and reflections on the healing power of sport.

Q1. When did you become involved in indoor rowing?

I was first introduced to the rowing machine at The Southport School and have continued using it ever since, largely as an off-the-water training tool whilst rowing.

It’s only really been in the last few years that I have become aware that indoor rowing was recognised as a sport in its own right largely through my involvement with Australian Defence Force Adaptive Sports and Invictus Games Sydney 2018.

Indoor rowing became a tool to support my ongoing physical and mental rehabilitation. It also connected me with a wonderful international network of amazing people of all ages, backgrounds and abilities.

Q2. How much technique is involved?

There is a basic element of technique required to use the indoor rowing machine. These basic elements are important to minimise the risk of injury, particularly in the lower back area. I would encourage anyone using the machine the first time to ensure that they have the appropriate medical advice and some basic instruction.  In fact, you continually strive to learn more about yourself and the rowing machine. Fortunately, there is a very supportive community and a number of online resources available to assist including Rowing Australia, Concept 2 and Dark Horse rowing.

Q3. Why do you think that there is a continued rise in indoor rowing?

In my experience, indoor rowing is the ultimate test of fortitude; it eliminates some of the traditional barriers to participation and surrounds itself with a supportive community.

a) Indoor rowing is the ultimate test of truth and fortitude

I think it’s fair to say that there is absolutely no hiding on a rowing machine. It not only provides clear metrics around speed, strength and         endurance but it also shines a light on your ability and courage to endure pain and adversity.

b) Breakdown of barriers to participation and engagement

One of the main things I love about indoor rowing is that it removes a number of barriers to participation and engagement. People of all fitness levels and ages are encouraged to participate.

It’s a wonderful low impact sport that allows you to nurture and maintain your fitness whilst reducing the risk of injury. Similarly, it’s open to people of all abilities.

You can also train and compete in a group environment at gyms and clubs, or alternatively in your own garage or lounge room, provided you have access to an indoor rowing machine.

c) There is a high level of respect and goodwill among the indoor rowing community.

I have been fortunate to connect with a number of people in the indoor rowing community. Through that experience, I have found that most people in the indoor rowing community realise that first and foremost that the competition is largely against yourself. For that reason, regardless of the result they celebrate each other’s achievements for even having given it a go. Here lies the true spirit of the sport.

People across the community display a willingness to reach out and offer advice and encouragement. The Concept 2 online logbook (supported by ErgData App) is a great way to input results, manage improvements and stay connected.

Q4. How would you describe your experience in indoor rowing at Invictus Games Sydney 2018?

In one word: EPIC

The indoor rowing event was one of the most popular events at the Invictus Games. I think there were about 50 competitors in the Open Men’s event alone. It was also one of the most gruelling events, as noted by Mark Ormrod it was the only event where competitors were issued with their own ‘spew buckets’.

Prior to the first race it was a case of staying flexible, warm and managing my adrenalin and anxiety. I listened to Mark Knofler’s ‘Wild Theme’ from the ‘Local Hero’ soundtrack. Just prior to walking in to compete I switched to listen to the Gallipoli soundtrack. I thought about the ANZACs and all the veterans since that placed themselves in harms’ way to protect our Australian way of life. I thought of all the wounded veterans and their families, as well as the challenges faced by all those in our community suffering from wounds and disabilities. I thought about the carers, the loved ones that continued fighting the good fight side by side those that were suffering. I thought of my family, my wife, my children. I was so grateful and all I wanted to do was to get out there and do my best.

Walking into the competition was surreal. The experience was a cross between Gladiator and the Melbourne Cup. I shuffled alongside some massive units from the Ukraine, Romania and USA. We were brought together into an arena that resembled a colosseum with shouting crowds.  There were screens throughout the arena that displayed the lanes and the position of the competitors throughout the race. A number of spectators mentioned that it felt a lot like a horse race as competitor positions kept changing as they moved through the field towards the finish.

One of standouts of the event was that family and friends were close enough to see the pain on our faces and to smell the adrenalin.  We were constantly moved from goose bumps to tears watching people push themselves to their limits and demonstrate the unconquerable human spirit. It truly highlighted the healing power of sport and gave me many rewarding friendships for life.

I was honoured to be part of an outstanding team and proud to be an Australian! 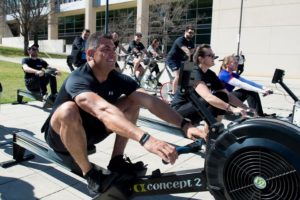