Hot conditions on the opening day of the 2019 World Rowing Championships saw 11 out of 12 Australian crews progress to quarter or semi-finals in Linz-Ottensheim, Austria.

Alice Arch finished fourth in the Lightweight Women’s Single Scull and will contest the repechage on Tuesday in a bid to make the semi-finals of her boat class.

With the mercury hitting 31 degrees, the new look Men’s Quadruple Scull of David Watts, Cameron Girdlestone, Campbell Watts and Hamish Playfair came out firing in their heat. Needing a top two finish to secure a semi-final place, the crew, stroked by David Watts, were second at the 500 metre mark to Germany, before muscling into the lead to take the win in a time of 5 minutes 51 seconds. Post-race David Watts said, “I thought we had quite a good hit out, obviously this is a new crew – with the new bow pair coming across from the double – so we were a little uncertain as to where we stood coming into the competition. We executed the race as well as we possibly could at this point in the competition and we’re thankful to have got a result out of it.

“Conditions were pretty variable but it’s a fair course, so we all got the same conditions. Training in Italy for the last few months has definitely helped for the heat acclimatisation.”

Annabelle McIntyre and Jessica Morrison continued their strong form from the World Rowing Cups, with the Women’s Pair winning their heat and progressing to the quarter-finals on Wednesday.

“I think we had the best conditions of the day, very little wind, warm but not too hot [the Pair raced earlier in the day]. We went out do a job, and we’re happy with the outcome of today’s race, it now about refocusing for our Women’s Eight heat, before turning out attention again back to the Pair.

“It was great to hear the Aussie supporters as we’re coming down the course and also as they cheered us over the line,” said McIntyre.

David Bartholot and Caleb Antill needed a top three finish in their heat of the Men’s Double Scull. The duo were the last Australian crew to race on the opening day and they didn’t disappoint. Ireland took the early lead, but then the Australians edged in front for the middle thousand, after upping their stroke rate at the 500 metre mark.

However, as the crews crossed into the final quarter of the race, it was the Irish who edged ahead to take the win, with Australia in second and Belarus in third – all three progress to the quarter-finals. 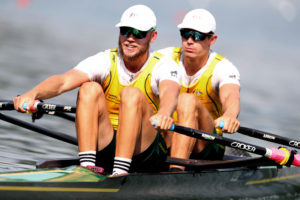 “I was a bit nervous going into it, I feel like I’ve done everything I could over the last year, so I was also quietly confident in myself and my doubles partner, Caleb, who is both young and experienced having won a silver medal in the Men’s Quad last year.

“We wanted to hit a good rhythm throughout the middle of the race, which we did pretty well, I think for our quarter-final it’s about moving it up again and finding that extra step for the final quarter,” said Bartholot.

The PR3 Mixed Coxed Four opened Australia’s 2019 World Rowing Championships campaign with a win in their heat to progress through to Thursday’s semi-finals. The crew of Alexandra Viney, Alex Vuillermin, Ben Gibson, James Talbot and coxswain Renae Domaschenz, came out strong and held off a late charge from Italy to claim victory.

The Men’s Pair of Joshua Hicks and Sam Hardy were drawn in Lane 3 of their heat alongside favourites, the Sinkovic brothers from Croatia. The Australia duo had a good start and maintained second position throughout the heat to book a spot in Wednesday’s quarter-finals.

It was an exciting heat for Leon Chambers and Hamish Parry in the Lightweight Men’s Double Scull. At the 1500 metre mark it was a push and pull between Australia, New Zealand and Great Britain, with barely a bow ball between the crews. New Zealand muscled their way into the lead, but the Australians went with them, leaving Great Britain trailing in third. Australia crossed the line in second, just over two seconds behind their Trans-Tasman rivals, with both crews, along with Great Britain progressing to the quarter-finals.

The new partnership of Georgia Nesbitt and Sarah Pound, in the Lightweight Women’s Double Scull, were fourth in their heat to book a place in the quarter-finals later this week. The Australians were up with the race leaders Italy, Canada and USA, with all four crews progressing.

Australia are the reigning World Champions in the Men’s Four. Alexander Hill and Jack Hargreaves have been retained in the crew from 2018, with the duo joined by Nicholas Purnell and Jack O’Brien. Drawn in Lane 3, the Australians led their race from start to finish to book a place in the semi-finals. The Australians’ cross the line in a time of 6 minutes 4 seconds.

The Women’s Four won their heat in a time of 6 minutes 38 seconds, making them the fastest finishers of their heats. The crew of Lucy Stephan, Katrina Werry, Sarah Hawe and Olympia Aldersey have been dominant in the World Rowing Cup series and today held off competition from reigning World Champions, the USA, to take out the win and progress to the semi-finals. Australia’s Lightweight Single Scullers were the last Australians to row before the lunchbreak, with Sean Murphy crossing the line in third to book a place in Wednesday’s quarter-finals. Alice Arch, took on Japan, Great Britain, Kazakhstan and Canada in her heat. Needing a top two finish to make the semi-finals, Arch came out strong, but crossed the line in fourth place and will thus contest Tuesday’s repechage in the Lightweight Women’s Single Scull.

Reigning World Champion in the PR1 Men’s Single Scull, Erik Horrie, wearing a black armband to acknowledge the passing of fellow competitor Dzmitry Ryshkevich, needed a first place finish to book a spot in the semi-finals.

With today marking one year to go to the Paralympic Games, it seemed fitting that the Paralympic silver medalist took to the course in fine form. The Australian led the heat from start to finish and clocked the fastest finishing time of all the heats, 10 minutes 14 seconds, to secure a place in the semi-finals.