Men’s Eight into A-Final in Austria

Australia’s Men’s Eight have secured themselves a spot in Sunday’s A-Final at the 2019 World Rowing Championships by virtue of finishing second in their heat today (Tuesday) in Austria.

The third day of racing in Linz-Ottensheim saw Australia’s Alice Arch win her repechage to progress to the semi-final of the Lightweight Women’s Single Scull, while the Women’s Eight and Women’s Quadruple Scull will both contest repechages to progress to their respective A-Finals.

The Men’s Eight, racing in hot conditions, needed a top two finish to progress direct to the A-Finals. The heat saw the Australians joined by Russia, Italy, Canada and reigning World Champions, Germany. Australia’s crew of Karsten Forsterling, Alexander Purnell, Angus Moore, Simon Keenan, Timothy Masters, Joshua Booth, Spencer Turrin, Angus Widdicombe and coxswain Kendall Brodie were drawn in Lane 2. Unsurprisingly, Germany were the first to show and squeeze out a lead in the heat, but Australia, Italy and Canada were all hot on their heels to secure the second A-Final berth on offer.

As the crews crossed the 1500 metres markers, Australia had pushed ahead of Canada and Italy to be sitting in second place to Germany. With the finish line approaching the Germans were still in front, but the Australians were in touch of the reigning World Champions, and the crews crossed the line in first and second to secure the A-Final spots on offer.

Karsten Forsterling, racing in his first senior event since winning silver at the 2016 Rio Olympic Games said, “It’s my first race since Rio, so I was pretty nervous to be honest. It was the first run down the two kilometre course, and in the Eight, it’s great to be in the best seat in the fastest boat. It was a bit of a blow out for us, which is what we needed, we’re through to the final which is good.

“I’ve been in the boat for a week now, and we’ve got another five days to go in the context of where we’ve come from we can really use this week to go back and do a bit of training, working on some key skills and taking it all one stroke at a time ahead of the A-Final on Sunday.”

The Women’s Eight were drawn in Lane 2 in their heat and needed a win to secure an A-Final berth and avoid the repechage. The crew of Leah Saunders, Jacinta Edmunds, Bronwyn Cox, Georgie Rowe, Rosie Popa, Annabelle Mcintyre, Jessica Morrison, Molly Goodman and coxswain James Rook had a strong heat to contend – being joined by crews from Russia, USA, Romania, Netherlands and Denmark.

The USA, the reigning World Champions, were the fastest out the start, with Australia in close contetion. While the USA took a marginal lead at the halfway, Australia remained in touch throughout. With only one A-Final berth up for grabs, it was the USA that took it, with Australia in second, just 2.36 seconds behind. 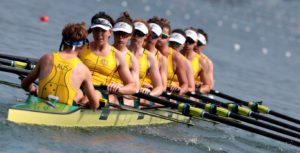 “We know that we have what it takes to be up the top. There’s a lot of good crews, but we’ve got to keep focusing on what we can control inside in the gunnel of our boat, and look to execute the best race we can. We can’t really do much more than that, the result will take care of itself after we get the process right,” said coxswain James Rook, looking ahead to the repechage.

Alice Arch was first up for Australia on Day Three in Austria for the 2019 World Rowing Championships. The Lightweight Single sculler was drawn in Lane 4 and needed a top three finish to progress to the semi-finals later this week.

The Australian took on China, Sweden, Ireland and Italy in the race, with the Italian, Paola Piazzolla, coming out fast at the start and Arch going with her. As the crews reached the final 1500 metres, Arch pushed alongside Piazzolla with Ireland’s Lydia Heaphy going with her. As they reached the final 10 metres, it was Arch who surged ahead to take the win in a time of 7 minutes 47 seconds, with Pizzolla in second and Leahy in third. Australia’s Women’s Quadruple Scull of Cara Grzeskowiak, Fiona Ewing, Katrina Bateman and Rowena Meredith needed to win their heat to progress straight to the A-Final and avoid the repechage. The Australians were drawn in Lane 3, and took on New Zealand, China, Great Britain, Russia and France.

China took the early lead in the heat to wrap up the only A-Final berth, while Australia battled it out with New Zealand, Russia and Great Britain. In the end, Australia crossed the line in fifth and will contest the repechage on Thursday.