Three-time Paralympian Kathryn Ross made a strong return to international competition today (Wednesday) with a win and a new World’s Best Time in her preliminary race for the PR2 Women’s Single Scull. 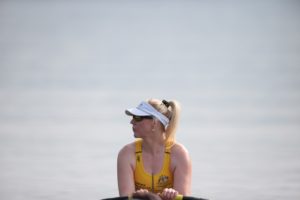 The three-time World Champion in the PR2 Mixed Double Scull, led her race from start to finish, winning in a time of 9 minutes 24 seconds and ensuring she got the best possible lane ahead of Friday’s A-Final. Ross took the win over the previous World’s Best Time holder, and her closest competitor, the Netherlands’ Annika Van Der Meer.

“It’s great to be back racing at a World Championships and to have that first hit out. I wasn’t aiming for the World’s Best Time but it’s really exciting to have gotten it with this being only the second year of the event running. I’m sure the competition will step up again on Friday in the A-Final, I’m looking forward to it,” said Ross.

Hamish Parry and Leon Chambers, in the Lightweight Men’s Double Scull, put in a solid sprint to the line in their quarter-final to hold off a challenge from Switzerland to finish in third in their quarter-final. The Australians worked their way through the pack, with China taking the win, Belgium second and Australia third.

“I was really happy with how we were going from the 750 to the one kilometre, and I think we were in a good position, while the Chinese were maybe a boat length up on us. We’re a good fit crew, we were just trying to sit in that rhythm like we’d planned, and with 400 metres to go I saw the other crews started to wind, so we did what we needed to do to stay in the top three,” said Parry. 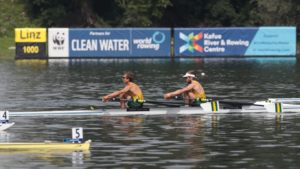 The Lightweight Women’s Double Scull of Sarah Pound and Georgia Nesbitt sat back in fourth for the first 1500 metres of their race, with the Netherlands, Belarus and China taking the early lead. However, the Netherlands muscled into the top spot, with Belarus in hot pursuit, leaving the Australian double to take on the Chinese for third.

Pound gave the call for Nesbitt to up the rate and the Australians sprinted to the line and a spot in the A/B semi-final, while the Chinese slipped out of contention.

“We wanted to put ourselves in the race earlier on and I felt like we had an awesome second kilometre, where we got ourselves into the position to finish third and get into the semi-final.

“Now we’re into the A/B semi-final, and it’s pretty cool to know the dream lives on for us to attempt to qualify the boat for the 2020 Olympic Games. If we make the A-Final we know we’ve qualified the boat for Tokyo, so we’re aiming for a top three finish tomorrow. If not, we’ll need to win the B-Final, but we’re going into tomorrow guns blazing for the A-Final,” said Nesbitt.

Australia’s Women’s Pair backed up from their Women’s Eight heat yesterday to race the quarter-final of their other boat class today. Annabelle McIntyre and Jessica Morrison fired out of the start with the Australian combination taking a commanding lead early in the race to cross the line in first place. 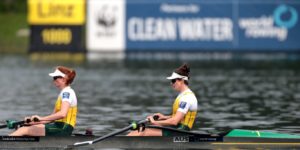 The Australians will have a big Thursday ahead of them, when they race both the Women’s Pair semi-final and also the Women’s Eight repechage a few hours later.

The Men’s Pair of Joshua Hicks and Sam Hardy took on Netherlands, Czech Republic, Spain, Serbia and Germany in their quarter-final. It was a gritty race from the Australian duo who were out in front from the start with Serbia and the Czech Republic right on the pace. Serbia edged ahead, but Hicks upped the stroke rate to 42 in the final sprint to overtake Martin Mackovic and Milos Vasic and the Australians surged to the line to take the win, with Serbia in second and Spain in third.

David Bartholot and Caleb Antill continued their journey today in the Men’s Double Scull today. The Australians took on an inform Switzerland and Great Britain, along with Canada, Argentina and USA in their quarter-final. The Australians were back in sixth place at the 500 metre marker, but worked their way through the pack to be in third by the halfway mark. Great Britain took the win, with Switzerland in second and Australia in third after a sprint for the line.

In the Lightweight Men’s Single Scull quarter-final, it was a close race from the start for Sean Murphy, with Gary O’Donovan of Ireland and Canada’s Aaron Lattimer hot on the young Australian’s heels. Coming into the final sprint, Lattimer just pipped Murphy at the line, while O’Donovan took the third semi-final spot.

Race times for Thursday 29 August can be found here.