Annabelle McIntyre and Jessica Morrison claimed silver in the Women’s Pair after a sprint to the line with their Trans-Tasman rivals, New Zealand, while Joshua Hicks and Sam Hardy took home a bronze medal in the Men’s Pair. Both boat berths are qualified for the Tokyo 2020 Olympic Games. 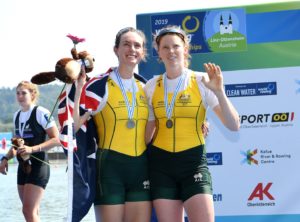 Elsewhere, the Men’s Quadruple Scull and the PR3 Mixed Coxed Four wrapped up their World Championships ranked fourth in the world while the Men’s Four were sixth in their A-Final. All three boats are qualified for Tokyo 2020.

Olympia Aldersey, winning her first Senior World Rowing Championships gold, was visibly delighted with her crew’s victory in the Women’s Four. “I won my first World Championships gold medal back in 2012 in the Under 23s, so it’s taken me a while to get here! I think you can be a capable athlete mentally, but it’s about getting all your ducks lined up in a row and getting yourself in the right space to deliver.

“It’s taken me this long to get here, and I can’t thank enough all the people that helped us to get here. People like our patron Mrs Gina Rinehart who supports our National Training Centres – having an NTC this last Olympiad has been really great and having a squad has pushed everyone up. We couldn’t have done this year without the team behind us, it makes it all easier.

“We really worked as a crew to get here and it’s a credit to all of us for delivering our roles to get us over the line,” said Aldersey.

Hawe added, “The field was so strong today so it’s really amazing to come away with the win. Last year we won silver, so we had a lot of determination to do better this year. I’ve never been to the Olympics before, so it would be really amazing to have the chance to go.”

The Women’s Pair of Jess Morrison and Annabelle McIntyre were just pipped at the line by New Zealand, but will take on both New Zealand and bronze medalists, Canada, in the A-Final of the Women’s Eight on Sunday. All three medaling crews are doubling up into their countries Eights.

Post-race, silver medalist McIntyre said, “We gave it everything we could and it puts us in a really good position for next year, and we’re really excited about what we can do ourselves and what our team can do as a whole.

“We’re really looking forward to having a good hit out tomorrow in the Women’s Eight and seeing what we can do set ourselves up for next year.”

The Men’s Pair final saw Croatia come away with the gold medal, while Australia battled it out with New Zealand for silver and bronze. In the final stages, the New Zealanders broke into second, with Australia holding off a challenge from Italy to take home bronze. 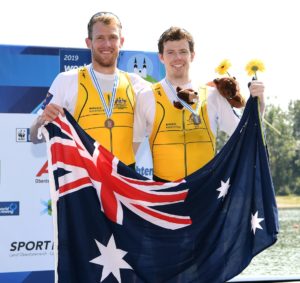 Sam Hardy, winning his first Senior World Championships medal in the Men’s Pair said, “It feels amazing, I can’t believe we won a medal here and qualified the boat for Tokyo. It was a really stiff head breeze, so we kept it really internal and then opened it up in the middle of the race. I can’t believe it.

“It’s been great to row with Hicksy (Josh Hicks), he’s a two-time World Champion, and so it’s amazing to have learned from him. He really turns up on race days, there’s no one else I’d rather row a boat with.”

In the PR3 Mixed Coxed Four Australia’s crew of Renae Domaschenz, Alexandra Viney, Alex Vuillermin, Ben Gibson and James Talbot were fourth at the halfway mark of their race, making a late push on Italy, but the crew just missed out on a podium placing.

Australia’s Men’s Four’s A-Final was not a reflection of how the crew has performed throughout these World Rowing Championships, with the crew finishing up in sixth place after struggling to catch up with Poland who came out quickest at the start. Despite a valiant sprint from Alexander Hill, Jack Hargreaves, Nicholas Purnell and Jack O’Brien, the Australians were unable to make up the lost ground from a slow start.

In the Men’s Quadruple Scull of David Watts, Cameron Girdlestone, Campbell Watts and Hamish Playfair took on the reigning World Champions, Italy, as well as an inform Netherlands. It was the Dutch who came out fastest to take gold, and while Poland and Italy battled it out for silver and bronze – the Australians pushed on the leading pack. However, the Australians ran out of room, with the Dutch taking the win, followed by Poland and Italy.

In the B-Finals today, the Lightweight Men’s Double Scull sprinted to the line with the Belgians but just missed out on an Olympic qualifying berth. Hamish Parry and Leon Chambers wrapped up their World Championships ranked eighth in the world, while Sarah Pound and Georgia Nesbitt finished third in the B-Final of the Lightweight Women’s Double Scull to be ranked ninth in the world.

The Women’s Quadruple Scull of Cara Grzeskowiak, Fiona Ewing, Katrina Bateman and Rowena Meredith were fourth in their B-Final, finishing 10th in the world.