Recognised as one of the top pieces of fitness equipment by some and yet feared by others, the rowing machine (erg) has enormous potential to increase endurance, power, speed, cardiovascular fitness, and can even help the boat go faster!

We asked two of our current Australian athletes about their perceptions of indoor rowing and how it works in as an essential part of their overall training program. This is perhaps even more relevant to all our community now as we look to train at home as rowing on water is not an option for us due to the current COVID-19 pandemic. 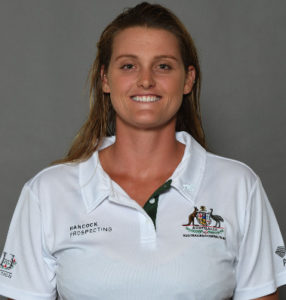 Georgie Rowe came to still water rowing after competing in both surf boat rowing and paddle sports. A two-time World Championship medallist in the Women’s Eight, Georgie was named in Australia’s women’s sweep squad, in the now cancelled 2020 World Rowing Cups 2 and 3.

Georgie has a strong history with indoor rowing, being crowned National Champion at the Australian Indoor Rowing Championships in 2016 and in November 2019 she broke the 5000m World Record in a time of 16:54.2. We caught up with Georgie who had this to say indoor rowing.

Being an on-water rower, training on the erg would be a part of our overall training regime. Do you like erg training?
Erg training is a very important aspect of our overall regime. I definitely have a love hate relationship with the concept 2 erg, some days it’s the last thing I feel like doing and then others I feel good and have a crack at a world record. I think accepting the erg for what it is and trying to imagine yourself actually rowing and transferring technical aspects to it can be very beneficial. So my advice is get comfortable erging because it never gets easier!

Was rowing your first sport, and have you used the erg in other sports?
Before I got into still water rowing I dabbled in a few sports. I’m certainly not foreign to any water sports, I was right into kayaking as well as surf ski paddling and then surf boat rowing. I also grew up kicking more than just my brothers, I played soccer, netball, softball, touch footy. I think my exposure to many different sports has been hugely beneficial and have learnt some very important life skills. Other than your occasional 30 second sprint in a circuit class at the gym it wasn’t until I started surf boat rowing when I really began training on the erg.

Have you learnt any technique on the erg that has helped your rowing on-water?
Erg technique is very transferable onto the water, and since being at the training centre I’ve seen a big change in my technique. I went from an environment where we just learnt from each other to a high performance centre. The biggest technical change for me and what has helped my on-water rowing may be basic but it’s probably the sequence of the stroke and being able to do it consistently, although my coach John (Keogh) would say it’s getting my heels down which I’m still working on!

How does training on the erg make the boat go faster?
I will be the first to admit that ergs don’t float, a big erg doesn’t necessary mean you are an efficient rower although they certainly help and, in my case, get you noticed. Erg training is hard physically and mentally both are two key aspects you need to make boats go fast. You need to be physically and mentally strong and this machine is perfect to practice both.

What is your favourite erg to do? Why?
My brain much prefers sessions when we are doing distance efforts as opposed to time. Anything from 500m efforts at a target split to more specific session, I enjoyed one which was 4km rate 22, 3km rate 24, 2km rate 26, 1km rate 28 and maxing out at these rates. It hurts but it’s a lot more stimulating than 2 x 30min rate 18.

What is your favourite erg music?
Depending on the session, but for the lower rate pieces I prefer more chilled music, as long as ABBA doesn’t make it into the playlist then I’m a happy camper. I’ve got to give Rosie Popa a shout out because she can put together a sweet playlist that I could listen to all day on the erg.

What did it feel like when you knew you were going to set a new 5000m World Record?
I must admit breaking the 5km world record wasn’t on my radar as I thought it was too far out of reach. I certainly didn’t let that stop me and going into that erg I knew exactly what split I’d need to average to break it. It wasn’t until I was about halfway when my coach, John Keogh whispered in my ear, “it’s yours if you want it”.

I get pretty excited when people are yelling at me on the erg and in that moment, I had to make a quick decision. Go for it knowing that your legs are full of lactate, your lungs and heart are working in overtime but you have shot at doing something very special, or if you don’t go for it you’re still going to feel the lactate, your lungs and heart are still working just as hard and you’ll probably still get a PB but I’d have given away an opportunity and that’s just not in my DNA. I also didn’t know I’d got it until I checked afterwards and JK gave me a pat on the back.

What is your favorite testing distance on the erg and why?

I can’t say I have a favorite test, they all hurt in different ways. You’d think a 2km is the best because it’s the shortest but it’s one of the most painful physically and requires a lot of mental preparation. The 5km I find is a good distance to get into a solid rhythm and I personally don’t rate as high which I like. The 5km is a huge mental game though and a big aerobically on the body. I’ll tell you my least favorite, a 30 min max at rate 20.

Have you seen some of the recent indoor rowing challenges like the Urban Games? Which do you think you would be better at:

Both of those options sound pretty hard, rate 14 for 6kms would take a very long time but then the other option sounds like the rowing version of the beep test, and I’m still traumatised from doing it in year 9. I think I’d like to give the second option a go, I reckon we could have a bit of fun with that one!

Next week we catch up with David Watts, from the Reinhold Batschi Men’s NTC on his relationship with the indoor rowing machine!