The inaugural 2020 Anzac Day Indoor Rowing Challenge was a great success, with 1500 participants from across Australia and New Zealand involved with the challenge that encouraged rowers of all ages and abilities to row 2504m, on the 25 April, to honour this year’s Anzac Day at home.

The results of the challenge saw Australians and New Zealanders combine to record 19,398 kilometres on the day and money raised for both the RSL Australia ANZAC Appeal and the Royal New Zealand Returned Services Association.

While participants for the event came from across the rowing and non-rowing community, it was the Australian Defence Force (ADF) 2019 King’s Cup crew, and their families, that put in some of the biggest distances on the day.

Major Carl Bleimschein, Battery Commander for Australia’s 1st Artillery Regiment, was a reserve for the 2019 ADF King’s Cup crew that competed at the 2019 Henley Royal Regatta and had not been on his indoor rowing machine much ahead of Saturday’s event, when he recorded over 75,000 metres for Australia.

“The 2019 King’s Cup crew found out about the Anzac Day Indoor Rowing Challenge through Brigadier Alison Creagh, our King’s Cup team manager, and we were all very keen to get involved! I thought a bit of friendly competition within the crew and more importantly against the Kiwis would be an excellent way to spend an Anzac Day in isolation.

“The lead up to the King’s Cup was pretty intense, most crew members were doing about 20 – 40 kilometres of rowing a day and so, when we wrapped up last year, I decided to take a bit of time off rowing. I have done a few erg workouts this year, but nothing more than about five kilometres, which made 75 kilometres in one hit a bit of a rude shock!”

While the total amount participants were required to do on the day was simply 2504 metres, Major Bleimschein and his fellow ADF colleagues combined to put in well over 350,000 metres for the Challenge.

“I just wanted to test myself and see how far I could go in one session. I was aiming for 100 kilometres but decided to call it a day at 75, 120 metres – as I was starting to get quite tired!

“To my mind, Anzac Day means two things, remembering the extreme cost of war and celebrating the positives such as courage and mateship that manage to exist despite the adversity. To be able to reconnect on the day, this year, with my crew mates was fantastic. The entire squad, including the coxswains, got in involved and it really felt like we were all pulling together again.”

In Brisbane, husband and wife duo, physical trainers Sergeant Damien Richardson and Corporal Marissa Richardson, decided to combine and row an incredible 120,000 metres on the day for the cause.

“I originally picked for us to do 105 kilometres as its 105 years since the landings at Gallipoli, we felt 100 was achievable when we were closing in on it, so we pushed it out 120 kilometres,” said Sergeant Richardson. His wife, Corporal Richardson, added, “For me, it got easier towards the end. The hurt got the same and I just kept going, I was feeding off about five hours sleep as well thanks to our kids!

“When you do a normal session it hurts, you pull from other motivations to get you through, but I was just thinking on Saturday that I am hurting now, I’m going to hurt tonight and I’m going to hurt tomorrow, but that’s nothing to compared to how much hurt our soldiers went through. If I can draw the line there and put myself through this little bit just to feel a little bit of what they went through, then it’s nothing in comparison.”

Sergeant Richardson, who competed in London as part of the ADF King’s Cup crew, echoed his wife’s sentiments adding, “If you think about those guys who pulled up on those beaches in Gallipoli, a number of them would have had to row big heavy boats, exhausting themselves while also being fired upon. They were pre-fatigued before they went into a warzone, so doing 60 odd kilometres on an erg didn’t seem like too much of a challenge as a way to honour them.

“I haven’t been on an erg or rowed since London. My other sport I focus on is boxing, so I run and hit the bag, so it wasn’t the easiest of things to do, but I love the rhythm of rowing, it is such a powerful sport to do.”

Corporal Richardson on the other hand has been on the rowing machine more regularly, “I row once or twice a week, it’s an easy thing to do with the kids and getting back into fitness, it has been good to get my cardio fitness back. Both Damien and I rate the machine as it’s an excellent work out as it’s low impact and takes the stress off joints for people of all ages.”

Reconnecting with the King’s Cup squad was certainly an additional inspiration for Sergeant Richardson on the day. “I get goose bumps thinking about London. That bond with the ADF King’s Cup group is something we’re going to have together forever. 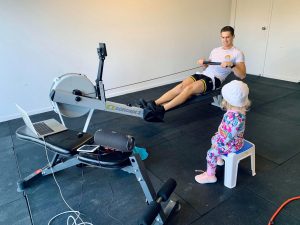 Damien Richardson under the watchful eye of his tiny trainer!

“There wasn’t too much banter between us, instead there was lots of encouragement, and it was such a nice thing to reconnect. It wasn’t planned, I knew about it during the week, the group motivated me to do it – and I then I roped Marissa in. It was such a cool thing to do with my wife, having our kids watching – it really was an inspirational day.”

While Major Bleimschein clocked over 75,000 metres, and the Richardsons some 120,000 metres between them, their team-mate Sergeant Rachel Rook, some six months pregnant in Darwin, hopped onto her rowing machine to record 20,000 metres for the cause. Meanwhile, her husband, an army reservist and firefighter, Matt Rook, did five sets of 2504 metres, only breaking in the middle to fight a fire before returning to complete his sets on the erg!

Captain Mitch Lindsay, on deployment in PNG, recorded a marathon, while stroke of the 2019 King’s Cup Eight, now reservist Major Tom Cregan,  recorded over 50,000 metres on the day.