The mass-participation competition challenged anyone with a rowing machine at home to see how far they can row in one minute. Members of the public competed alongside rowers from each nation’s Olympic and Paralympic teams for individual awards in various age, weight and adaptive rowing categories, with international bragging rights also at stake for the country that recorded the furthest combined distance.

In comparison, Australia finished in second with regards to number of participants (629) and metres rowed (148,034 metres), however were fourth when it came to the average number of metres per participant (235 metres). 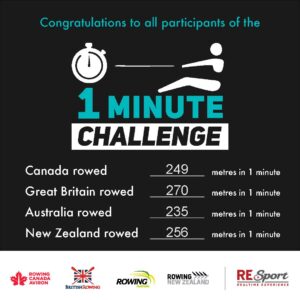 The event saw Erik Horrie set a new World’s Best Time for the One Minute (still to be confirmed by Concept 2). Horrie, who currently holds the record for the Men’s PR1 40-49 year old category, with a total of 319 metres, recorded the impressive number of 327 metres in a minute.

A number of Australians were among the Top 10 results across various categories – dependent on whether they used Concept2, Water Rower or a different indoor rowing machine. Readers can view the Leaderboard here on the ReSport website and break it down by category.

It is worth noting that a number of Australians topped the leaderboards in their respective categories. There were 17 Australians who topped their age groups and indoor rowing machine category. While Daniel Brighthope clocked the highest number of metres by any Australia, 405 metres on a Concept2 in his category of Men 19-29 years old.

Below is a table of those individuals who topped their respective category in the four-nation event.