A century of celebration

2020 is year of many centenary celebrations for women’s rowing. The ULVA Trophy (later known at the Queen’s Cup) was presented for the first time, 100 years ago, to the ladies from the Mannum Rowing Club who represented South Australia in the first Interstate Women’s Coxed Four competition. Whilst this was the first official Interstate Championship, other Interstate contests had already been held by female rowers for many decades.

The Australian Women’s Rowing Council, was created at the Telegraph Chambers, Brisbane and had representatives from lady rowers of South Australia, New South Wales and Queensland. The Council was in existence for many years before RA’s newest Life Member, Katherine Bennett, played pivotal role in amalgamation of the Women’s and Men’s Rowing Councils between 1979 and 1982. Katherine’s role also saw her greatly expand women’s rowing in Victoria and across Australia. 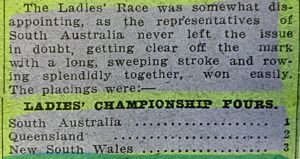 Rowing Australia Life Member, Barbara Fenner said, “It’s wonderful to have seen Kath recognised as one of our newest Life Members, especially due to her hard work, along with many other women, to see Australian women’s rowing supported appropriately and also see women recognised equally to their male counterparts.

As the first woman to coach for Australia at the World Championships (WL4- in 1987) Barbara’s professional career has spanned a time of great development in women’s rowing that has paralleled the cultural and technology changes in sport.  Barbara said, “The recent gender equity changes to the World Championship program have certainly been a highlight of the last decade.”

Australia has a rich history of international women’s rowing, including at combined World Championships from 1974 while our first female crew competed at an Olympic Games in 1980. Anne Chirnside, Verna Westwood, Pam Westendorf, Sally Harding and Susie Palfreyman finished fifth in the Women’s Coxed Four at the Moscow Games. Australia’s first women’s crew to win an Olympic medal in the sport was the Women’s Coxed Four of Robyn Grey-Gardiner, Karen Brancourt, Susan Chapman-Popa, Margot Foster and Susan Lee at the 1984 LA Olympic Games.

In noting the many firsts of our female rowers, Australia’s first women to win an Olympic gold medal in rowing were of course Megan Marcks (nee Still) and Kate Allen (nee Slatter) in the Women’s Pair at the 1996 Atlanta Olympic Games, while Kathryn Ross (alongside John McLean) became rowing’s first female Paralympic medalist when she won silver in Beijing in 2008.

Our Masters rowing community continue to contribute greatly to the sport, with many women, including those Olympians from the 1980 and 1984 Games, continuing to row and contribute to the sport on many levels.

We’re proud to be a sport where our athletes are now supported equally at the top level, we have dedicated women’s and men’s high performance training facilities and our sport continues to celebrate the achievements of our men and women equally – thanks to the hard work of many to see the sport united together as Rowing Australia.

While women’s rowing had been around for decades prior to the council forming, as had racing, RA Life Members Barbara Fenner and Andrew Guerin have recently come across an article in The Advertiser from 28 January 1916 (pictured below), which shows that there was a Ladies Eight race on the Torrens, in Adelaide. There are thoughts that this could be the first Women’s Eight race in Australia – however, we want to know, do any of the States/Clubs know of earlier Women’s Eights races being held? Email us on [email protected] if you have any further information!

Did you know you can now purchase ‘Upstream, Against the Current – The Story of Women’s Rowing in Australia’ via the RA website by clicking here. This book uncovers the hard won triumphs of women rowers in Australia since the 1880s. Women set up their own clubs as they were not permitted to join men’s clubs until the 1980s, despite their success in national and international competition. The history covers the long fight for equality, personal stories and the aesthetic quality that drew women to the sport whether for recreation or competition.