Stephen commenced rowing in 1957 at Brisbane State High School and Commercial Rowing Club and first raced in the Queensland Eight Oared Championship in 1959. He went on to represent Queensland in the King’s Cup in 1962. 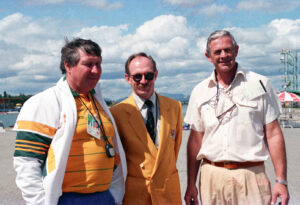 Most notably perhaps, he is lauded for the work he did as President of RA from 1996 to 2000. Stephen worked tirelessly to transform the national organisation into the governing body it is today. While Stephen was supported by many members of the rowing community during these transformational times, his vision, leadership, commitment and personal manner were second to none.

His delightful and friendly way was always appreciated and all his decisions be they as a Board Director, a Team Doctor or an administrator were taken with the sport’s and the athletes’ best interests at heart.

Many of Stephen’s friends and colleagues have reflected on the work he did to improve the sport, including his great friend, Peter Huggett, who described the work Stephen did between 1996 and 2000 for RA as his greatest contribution to the sport of rowing in Australia. 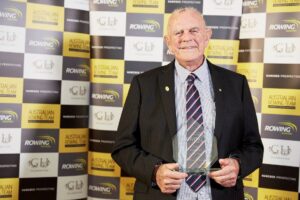 2015 Volunteer of the Year, the late Dr Stephen Hinchy

At the time of his ascendency into the President’s role, the organisation was struggling financially, organisationally and in high performance. Within four years, RA was on sound financial footing, organisational and governance effectiveness was restored and the team was performing on the world stage.

He held numerous positions at Rowing Queensland over the years, including Councillor, Chairman, Deputy Chairman and President for the organisation. While he was the Australian Rowing Team doctor for Senior, Under 23, Under 21 and Junior teams between 1984 and 2001, held the Team Manager role for many years and served as the Olympic Section Manager at the 1988 Olympic Games, having been Team Manager from 1985 to 1988.

At the time of his passing, Stephen had been an RA accredited Boat Race Official for 50 years, and had been a BRO for Rowing Queensland for some 59 years. Stephen became an accredited FISA official in 1994 and was a member of the Sydney 2000 Olympic Games rowing jury.

Had the 2020 Aon Sydney International Rowing Regatta taken place in Sydney in March this year, it would have been Stephen’s 50th year of continuous service as a BRO at Nationals.

Stephen was a true servant to Australian rowing and will be deeply missed. The thoughts of everyone at RA are with his wife Barb, their family and friends. Details of his funeral will be released in due course.

With thanks to Rowing Queensland, Andrew Guerin and Michael Eastaughffe