Delly Carr – Athletes Are Not OK

Award-winning sports photographer, Delly Carr, was due to be shooting his tenth Olympic Games this weekend. Carr has been photographing Australia’s top athletes for over 30 years with his main focus being on Olympic and Paralympic water sports.

With the onset of COVID-19 and the postponement of the Tokyo 2020 Olympic and Paralympic Games, Carr looked to the athletes he has shot on so many occasions, in triumph and defeat, and wanted to illustrate in a portrait series the moment they realised their Tokyo dream was postponed. 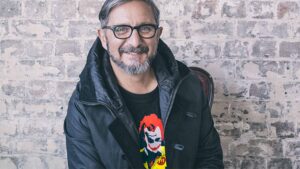 y released sportfolio is made up of 17 athletes – male and female, including 2019 Australian Rowing Team members, and Tokyo 2020 hopefuls, Georgie Rowe, David Watts and Ben Gibson.

The series, shot in a COVID-safe environment, has shown Carr the true emotions that Australia’s athletes have gone through with the postponement of the Tokyo 2020 Olympic and Paralympic Games.

“I took the photographs after talking to a few athlete friends when Tokyo was postponed. I quickly realised that Athletes Are Not OK. They kept telling me how their family, friends and the general public didn’t quite get what the postponement of Tokyo meant to them. There was heartbreak and heavy sadness. The decision really hurt them in so many different ways. Whilst they realise they are not above and beyond everyone else in society, their world of sport lies smashed in tiny pieces right now.

“They believed in my project and its message, and they wanted the world to know. Georgie (Rowe) was the main force in getting me to do the project. I then asked the athletes from sports I work in, and they all said yes immediately. Had I asked athletes of each Olympic sport, I reckon I would have got a 99% participation rate.”

Carr admitted the reactions were varied throughout the individual shoots, “Their reactions during the shoot was tears, anger, disappointment, disillusionment. They were super honest with me. They trusted me. They are my friends.”

The images, shot behind a frosted glass, helped to represent many things for Carr, “It’s ironic that the frosty glass that helped me achieve the effect (representing the surreal feel and uncertainty and depression of the COVID-19 time for all of us, the drops of water representing ‘tears’) is now in all stores between customer and shop attendant, the ‘germ shield’. So I photographed each athlete behind the glass. ‘Photographer and Athlete unable to exchange germs’.”

Alongside each of their images, which feature in our gallery below, Rowe, Gibson and Watts shared their feelings about the postponement of the 2020 Tokyo Games and what it has meant for each of them.

Georgie Rowe, who is aiming for her first Olympic Games said of her reaction to the postponement, “My initial reaction was relief, relief that a decision had been made as I had felt as though we were training for something so uncertain whilst the world appeared to be crumbling around us.

“Mentally I was in pretty good shape. I quickly went home, set up a new routine with working as a nurse and training indoors. I set small achievable goals and I also reached out to my nearest and dearest (one being Delly) and made sure my support network was in close contact. As the weeks went on, it certainly was a challenge. There were days I’d call some of my rowing buddies questioning what we were doing and why we were doing it. It felt like we were going through the motions with no goal in sight but the more time I spent at home the more I realised how much I love what I do and how grateful I am to be an athlete in such an unusual time in the world.”

Rowe admits though, while the date has changed, the target has not, “The ultimate goal hasn’t changed, it’s just shifted 12 months and because of this my preparation also has to be re-assessed. We have incredible access to some of the best in the business, strength and conditioning coaches, rowing coaches, exercise physiologist and everything in-between. Every aspect of our being could have been affected but with such great support around us both in and out of the arena we prepare as though we are going to the Olympics next year to win.

“In gearing myself up for 2021, the truth is I don’t know how I’ll do it. I’ve never been in a situation like this before and I think it’s fair to say either has the rest of the world. For myself, I know I need to stay present and make the most out of each day and each training sessions. When the Olympics roll around next year I want to have total faith in everything I’ve done, be in the best physical and mental shape and leave no stone unturned.”

Paralympic hopeful, Ben Gibson, was aiming for selection into Australia PR3 Mixed Coxed Four at the Tokyo Games. The news of the Games postponement hit Gibson hard, with his goals being moved by 12 months, the pain reflected in his portrait shot by Carr.

“I was pretty crushed and it is what I was going for in the photo shoot. I had a really good season with all things considered around the bushfires affecting training. I was fit, healthy and in a strong mental state. With 2020 realistically being my last year of Rowing and with potential plans of overseas travel and work, it totally crushed my life plans for this year and beyond.”

The change also impacted Gibson’s mental health, “I felt I had always been quite healthy mentally and I generally have good awareness of my mental health. However, with the goal posts being pushed back so far again, loss of motivation to train at home and also with more time on your hands, you question whether you really want to continue or not. Being aware of your up and down days really helps me and sometimes you just need to take a day for yourself to wash away all those thoughts and seeds of doubt.

“I’ve gradually increased my training load over the past couple of months. Taking the foot of the gas has helped me refresh mentally and physically. It has given me the time to focus on my career (as I work full time) and other interests as well that have not normally been afforded the time. Life plans that I had for this year have just been pushed back another year at least.

“I’ve already overcome so much from when I had a rugby injury four years ago that left me with a foot disability. This is just another hurdle for what has been an eventful last four years. Whilst another year away, it is still so close and I feel like I will look back on this period of my life in the future and be proud of myself that I continued the pursuit of my goal regardless of how the situation unfolds.”

The final athlete in the trio of rowers shot by Carr, was Rio 2016 Olympian, David Watts. The West Australian was aiming for his second Games when the news broke of the postponement of Tokyo 2020, “My first reaction was uncertainty as to whether I was going to continue on for another 12 months in pursuit of my childhood dream of becoming an Olympic gold medallist. I knew I had a few very important decisions to make. My original plan was to retire from high level sport at the conclusion of the Tokyo 2020 Olympic Games.

“However, once the announcement had been made, I had a lot of excitement to spend more time at home with the ability to do my own training. This excitement became the main driving force for my continued training once the postponement was announced. Since being back into normalised training, I’ve come to the terms with the reality of the postponement. It does feel like a much longer goal than I had initially planned for, but I am determined to see it through.”

Watts has found some joy in training at home in Canberra during these times though, “A very valuable lesson I’ve learnt out of training at home is that if I am able to find enjoyment in what I’m doing, I’ll be able to execute it better. Finding enjoyment in the training environment that I am in for the next 12 months will help me get myself ready for the Olympic Games in 2021.”

Click on the images below to view the full-size portraits.