Rowing Australia (RA) today announced that Olympic gold medallist, David Crawshay, has been elected as the new Chair of the Rowing Australia Athletes’ Commission (RAAC) and in turn has been appointed as a Director on the RA Board. He takes over the Athletes’ Representative position vacated on the RA Board by Hannah Every-Hall whose term on the Commission and Board concluded earlier this month.

Crawshay, who won gold at the Beijing 2008 Olympic Games in the Men’s Double Scull, will join the RA Board for his first meeting on 20 November 2020, via video conference.

A three-time Olympian, Crawshay is highly respected among the athlete body. As an athlete, he first competed for Australia in the Nations Cup in 2000 in Copenhagen, Denmark, where he won a silver medal in the U23 Men’s Quadruple Sculls. He went on to represent Australia at 17 World Rowing Cups and 10 Senior World Rowing Championships, while he of course also rowed for Australia at the Athens 2004, Beijing 2008 and London 2012 Olympic Games. 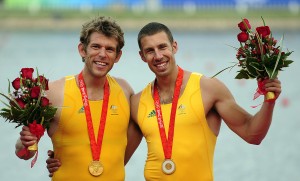 Off the water, Crawshay is a lawyer with a Bachelor of Laws from Charles Darwin University and Graduate Diploma of Legal Practice from the College of Law, Melbourne. He currently sits on the Administrative Appeals Tribunal as a member hearing appeals in the Migration Division.

Upon the announcement of his appointment, Crawshay said, “It is a real privilege to be elected the Chair of the Athletes’ Commission and to be appointed to the RA Board. Rowing has been such a large part of my life and it is great to be involved once again.

“Firstly, I would like to say thank you to Hannah Every-Hall for the excellent work she has done chairing the Commission and representing the athletes on the RA Board. I have always been impressed with her engaging personality and her work ethic and so it’s no surprise that she leaves both roles in good shape.

“I’ve had an association with the Athletes’ Commission since 2005 and I appreciate the types of issues that are discussed and resolved. I look forward to chairing the Commission, but also being a member of the RA Board and contributing the athlete voice to the strategic growth and development of rowing, especially during these challenging times.”

“David’s international rowing career speaks for itself, he’s an accomplished Olympic gold-medal-winning rower, respected worldwide, and I join with the entire RA Board and wider community in welcoming him as a Director of Rowing Australia.

“Finally, I would like to pay tribute to outgoing RA Athletes’ Commission Chair, Hannah Every-Hall, for her sterling efforts leading the Commission and her commitment and passion in the RA Board room.

“Hannah continues to be active in our community, especially in Victoria, coaching and supporting newcomers into rowing and those who are aspiring for international selection. I am delighted that Hannah will continue to serve on the FISA Athletes’ Commission until the end of 2023.”