Australia’s most talented rowers have received some “oarsome” news with Coles announcing it will expand its partnership with Rowing Australia to support community participation and fuel the national rowing team as they train for gold.

Nutritious and high energy food will be delivered weekly to Rowing Australia’s National Training Centres at Canberra and Penrith in NSW as part of Coles’ partnership which has been extended for two years. Coles is also supporting community participation in rowing by sponsoring events such as the Australian Indoor Rowing Championships which is open to anyone interested in rowing. In addition to its sponsorship, Coles paid the entry cost for around 250 students from secondary schools across Australia to compete for the first time in the recently completed 2020 championships. This included schools from Victoria, Queensland, South Australia, New South Wales and the Australian Capital Territory.

Rowing Australia CEO Ian Robson said the support was great news at a time when COVID-19 had created challenges for so many athletes, including Australia’s rowers.

“This is just fantastic news and we are extremely grateful, during these times of uncertainty, for Coles to renew and increase their commitment to rowing in Australia,” he said. 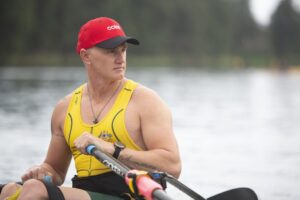 Paralympian Erik Horrie at the Coles partnership announcement in Penrith

“We are delighted that Coles has not only committed to the High Performance Program that underpins the Australian Rowing Team, but also to supporting the broader rowing community for the future.”

“Australia’s top rowers are important role models for young people because they inspire others to be healthy, active and committed. We are delighted to support the national rowing team with weekly deliveries of groceries and at the same time support rowing at a grassroots community level through events like the Australian Indoor Rowing Championships,” he said.

Australian rowing star Georgie Rowe said eating lots of nutritious food was vital to maintain energy for training up to eight hours a day, six days a week at the National Training Centre at Penrith.

“To have the ongoing support from Coles is awesome. As athletes, food is a vital fuel to ensure we perform to our best, so to know Coles have got our breakfasts and lunches covered, six days a week, means we can focus on making sure we deliver those podium finishes for Australia,” she said. The athletes and staff of the Hancock Prospecting Women’s NTC in Penrith, with Coles ambassador Courtney Roulston and Sunrise presenter James Tobin at the Coles partnership announcement.