Nick Green – Recalling the making of the ‘Oarsome Foursome’

The 1990 World Rowing Championships was one of the biggest events on the Australian sporting calendar. A record 41 nations travelled to Tasmania’s Lake Barrington, from every continent, to participate in this major regatta.

It was the first time that a world rowing championships had been held in Australia, and only the second time, following the 1978 regatta in New Zealand, that the event had been held in the southern hemisphere.

Green was part of the Australian Men’s Four, alongside Mike Mckay, Sam Patten and James Tomkins that became known originally as the ‘Awesome Foursome’ and later the ‘Oarsome Foursome’ for their feats on the water.

“I was a young kid back in 1990, just 19, training out of Melbourne University Boat Club and I was knocking on the door of this dominant force in rowing, including the Mercantile group of Mike (Mckay), James (Tomkins) and Sam (Patten).

“At the time Australia were trying to decide whether we wanted to put our focus into the Coxed Four or the Coxless Four, with the Coxed Four, at the time, an Olympic boat. So the year before the World Championships, in 1989, we raced an international regatta in the now Czech Republic, in both boat classes, one on the Saturday and one on the Sunday.

“I do recall the Coxed Four on the Saturday, there was a very strong tailwind, and we were leading at the half way and then I caught a crab and got kicked out of the boat and landed in the lap of the coxswain (in a bow coxed boat) and my rigger smashed in half. We then raced the Coxless Four the following day and won that race, and so made the decision to keep racing that boat for the year. We continued to race the Four and competed at the European Championships the following year, ahead of the World Championships in 1990. It was the formation of the nucleus of that crew that raced in Tasmania.” When it came to the World Championships in Tasmania, Green admitted that there was some pressure on the crew to succeed in front of a home crowd. “We were a profiled crew and there was an expectation on us, particularly as Australia had a history of not medalling and doing well in World Championships,” said Green.

“I was a young inexperienced athlete, so making my debut racing in a World Championships was about as aspirational I was going to get, and then to win it, quite comfortably, it changed our whole world. We went from being quite good to being Olympic contenders so there was a real mindset shift for all us post the 1990 World Championships.

“We had really great fun and a real camaraderie, Country Road were the sponsors of the Australian Rowing Team at the time and we were doing some commercials with them and the team was doing better than it had in some time, winning medals across a variety of boat classes,” recalled the two-time Olympic gold medallist.

Welcoming 41 nations to Tasmania was something Green recalls fondly, “It was quite iconic for us to have the world come to our shores and see Lake Barrington, there was a lot of opportunities showcasing our sport, our successes, so the event proved to be a really formative time for the sport.”

Recalling the A-Final, where Australia took on Netherlands, West Germany, Great Britain, New Zealand and East Germany, Green admitted the crowd was something to be remembered, “You’re not used to it, to hear that volume of noise, it is actually a shock to the system because you’re usually rowing in silence – I mean you’re aware of a few things, like umpires telling you where to steer or your crew mates making calls – but in essence you’re in silence.

“Clearly there was this milestone where you’d got through the 1000m mark, but with 800 metres to go the noise started to build and, if I recall, with about 300 metres to go you’re passing the majority of the crowd on the hill, in this natural type of amphitheatre, the sound just amplified tenfold. I think it’s probably one of the biggest crowds I’ve ever rowed in front of, even in comparison to an Olympics, and the crowd was just so boisterous because everyone was for Australia.

“I watched the race again recently; I hadn’t watched it in a very long time. I do remember the race, but it’s been good to look back on it and refresh my memory from 30 years ago, to see who came second and third and it was nice to see the Poms come fourth! I remember all my milestone races – what the weather was like, what the mood was like, what the warm-up was like and so on,” said Green. 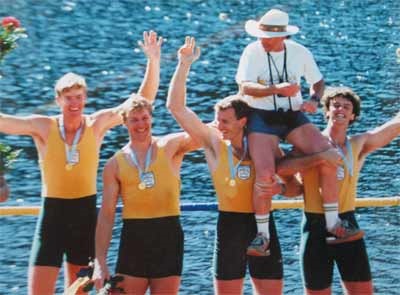 “Donno was a combination of our team manager, our chef, our mate, our counsellor, our coach, our chief organiser, boat rigging – he did everything with us. I think we realised the coaching dynamics with Donno had to be different to a normal coach-athlete relationship – as Donno had never rowed a rowing boat in his life – he’d been a coxswain, but he’d not rowed. So, he didn’t necessarily know what a rowing boat felt like to row fast but he could see it, he had a good eye and we had good feel. We worked out early on that him telling us what he saw and us telling him what we felt led us achieving what we called ‘fast, easy boat speed’.

“We had a great relationship that began with Noel in the late 80s and early 90s, and as we got older, Noel’s greatest attribute was managing the personalities. He was notoriously successful in bringing us up to race when it counted.”

The championships were notable too, for the fact that West and East Germany competed separately for the last time in an Olympic sport. “There was history in the making, and we realised we were inserted into that bit of history by being at the Worlds with the East and West Germans. It started when were travelling in Europe before the 1990 World Championships – there was a sense of change coming – and it happened at our event.