Rowing Australia is deeply saddened to announce the passing of Australian Olympic silver medal-winning rower, Stuart ‘Sam’ Mackenzie. Mackenzie, who has been residing in the UK for over 30 years, passed away suddenly on 20 October 2020.

Stuart Alexander Mackenzie was born on the 4 April 1937 and educated at The King’s School, Paramatta where he began rowing. After finishing school in 1954, Mackenzie rowed out of Leichhardt Rowing Club in New South Wales and first represented the state in 1955 in the King’s Cup, with the crew finishing in third place.   He also represented Sydney Rowing Club and upon his return to Australia rowed out of that club. 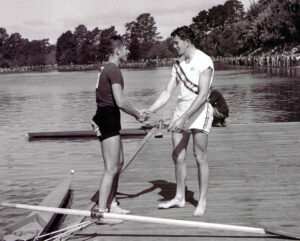 1956 MacKenzie congratulates Ivanov after the Russian took gold, ahead of the Australian at the Melbourne Olympic Games

He made his Australian Rowing Team debut at the 1956 Olympic Games held in Melbourne, winning a silver medal in the Men’s Single Sculls. By virtue of making his debut at the Games, Mackenzie became McVilly-Pearce pin number 78. Interestingly, rowing was one of three sports Mackenzie qualified for at the 1956 Games, having also qualified for the discus and shooting, but the New South Welshman ultimately chose rowing as his sport of choice.

In 1958, he competed in the both the Men’s Single Sculls and Men’s Double Sculls (the latter with Mervyn Wood) at the British Empire and Commonwealth Games, Cardiff, winning gold and silver medals respectively.

A feat that he is perhaps most well known for is his prowess at Henley Royal Regatta, where he won the Diamond Challenge Sculls six times, consecutively, from 1957 to 1962, and won the Silver Goblets partnering Chris Davidge in 1964 and the Double Sculls, also with Davidge, in 1959. 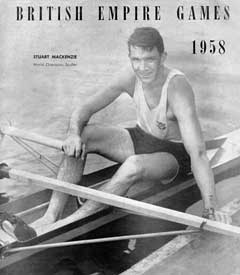 Although favoured to win the gold medal at the 1960 Olympic Games, in Rome, he fell ill before the race and had to withdraw. Mackenzie also represented Great Britain at the first World Rowing Championships, held in Lucerne in 1962, after refusing to return to Australia from Europe for trials for the 1962 British Empire and Commonwealth Games. 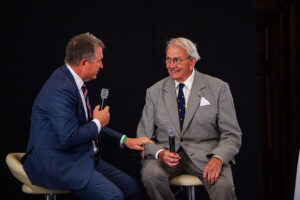 Away from rowing, many would not know that Mackenzie was in fact the son of a poultry farmer and was actually trained and worked as a chicken sexer, while he also rowed for Australia. A highly skilled sportsman, he was a scratch golfer and while living in Florida, US, played alongside famous US professional golfer, Lee Trevino.

Mackenzie was inducted into the Sport Australia Hall of Fame in 1985, while in 2018 he was the guest speaker at a Rowing Australia luncheon at Australia House ahead of the Henley Royal Regatta. Mackenzie was presented with his McVilly-Pearce pin at the function and presented a number of other alumni with their pins at the event. A vibrant and colourful character, his stories were enjoyed by all.

The great Australian sporting historian, Harry Gordon, wrote an essay summarising some of Stuart’s sporting prowess which can be viewed on Australian Rowing History’s website here.

He is survived by his sisters Margaret and Diana, his wife Heather and his children Rebecca, Alistair and Rachael.His funeral is to take place today, 5 November, in Taunton, United Kingdom, with his ashes to be scattered at a later date.