Former Loxton resident and two-time World Champion and Olympic silver medallist Alexander Hill was honoured today (9 November)  at an official presentation on behalf of the Loxton Community in recognition of his outstanding achievements in rowing. 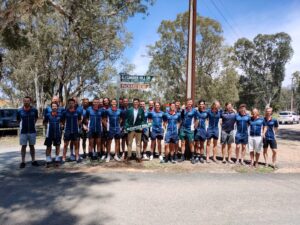 The presentation took place on the Loxton Riverfront adjacent to the Loxton Lions Park, and was attended by the full Reinhold Batschi Men’s National Training Centre who are currently in Berri, South Australia for a training camp. The group then attended a Mayoral Reception at the Loxton Hotel.

“Alexander has been exceptionally busy since discovering his love for rowing at the age of 16 at Prince Alfred College and we’re thrilled to be able to host this official ceremony on behalf of Loxton and Riverland residents. We are also delighted that the entire ‘Men’s National Training Centre’ will be in attendance to show support to Alexander”, said Mayor Stasinowsky. 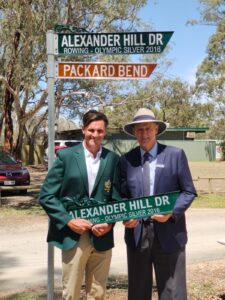 Alex Hill with the Mayor of Loxton

Hill competed for South Australia at the 2013 at the Australian Youth Olympic Festival and had the honour of lighting the cauldron at the Opening Ceremony.

In 2016, Hill was named in the Men’s Four, alongside Joshua Booth, Joshua Dunkley-Smith and William Lockwood, and raced at the 2016 Rio Olympic Games where he and the crew won an Olympic silver medal. 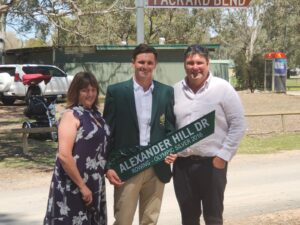 Alex Hill with his parents Michelle and Peter

In 2017, he was once again named in the Men’s Four, this time with Josh Hicks, Jack Hargreaves and Spencer Turrin. He went on to win gold at the 2017 World Championships, the first time in 26 years that Australia had won the boat class.

In 2018, Hill was once again named in the Men’s Four, where he raced at World Cups 2 and 3, winning gold. He raced in the same boat class at the World Rowing Championships in 2018, winning back-to-back world titles and was later named, with his crew mates, 2018 Male Crew of the Year by World Rowing.

The Loxton Waikerie Council are proud and excited to acknowledge this young South Australian, as Hill’s accolades are quite extensive and beyond his years.