Rowing Australia and 776BC extend apparel partnership until 2024

Rowing Australia (RA) and 776BC have today announced the renewal of their four-year partnership through until 2024.

The renewed partnership sees 776BC continue as the Official Apparel Partner and Sponsor of the Australian Rowing Team and RA.

Over the past four years, 776BC has been supporting the Australian Rowing Team by outfitting the Senior, Senior Para, Under 23, Under 21 and Junior Australian Rowing Teams, the two National Training Centres as well as supplying clothing and uniform services to RA staff. In addition, 776BC has also provided apparel and clothing for a number of RA events, including the Aon Sydney International Rowing Regatta and the Australian Indoor Rowing Championships.

776BC was co-founded by two-time Olympian and Beijing silver medallist, Cameron McKenzie-McHarg, and his wife Kate, and offers a range of products and services designed to enhance athletic performance. 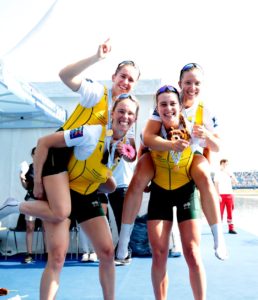 RA Chief Executive Officer, Ian Robson, said that RA was proud to be renewing its association with 776BC.

“It has been wonderful to work alongside the team at 776BC over the past four years, to create and develop a truly excellent range of apparel for the Australian Rowing Team and our staff that support them.

“It is fantastic to be able to build on our already established relationship and to work with a leading performance innovation company, in apparel, that in turn reinforces RA’s mission of delivering excellence on and off the water.”

2019 World Rowing Champion and member of the Hancock Prospecting Women’s National Training Centre, Lucy Stephan, said that working with 776BC on product development has been an enriching and exciting experience.

“Being able to contribute directly to the development of the zooties (racing suits) that I, and the rest of the team, will be wearing on the world stage has been an incredible experience. It feels great to know we will be continuing to wear clothing that we have all had an input into creating. To be able to share our feedback with a fellow athlete, in Cameron, is also awesome as we know he understands our needs first hand.”

Cameron McKenzie-McHarg, 776BC Co-Founder said that 776BC was honoured to be continuing our partnership with Rowing Australia for a further four years.

“We are delighted to be continuing our partnership with Rowing Australia, as their official apparel partner, and for Australia’s best rowers to be training and competing using 776BC products and technology,” commented 776BC’s Co-founder Cameron McKenzie-McHarg.

“We share a passion for performance and look forward to working together to achieve some exciting outcomes over the next four years – including leading into Tokyo this year and onwards to Paris in 2024.”

For more information on 776BC please visit http://776bc.com/