The first headwind and a constant drizzle over Lake Barrington this morning made for tough racing for the young scullers bidding to make it into the semi-finals at the 2021 Aon Australian Rowing Championships (ARC).

Sophie Malcolm of Centenary Rowing Club posted the fastest time for the Under 17 Women’s scullers this morning, while West Australia’s Sinead Reading and Kinross Wolaroi’s Lucy Searle were hot on her heels, with all three making it through to the A-Final that will race tomorrow morning.

Malcolm went on to race up a category later in the morning, impressively qualifying for the A-Final in the Under 21 Lightweight Women’s Single Scull event. Chad Willett of Rockhampton Grammar was again dominant in his Under 17 Men’s Single Scull semi-final finishing lengths clear of Trinity Lutheran’s Robert Vanderpol; both posted the fastest times of the division in this race, with Willett some 15 seconds clear of the other semi-final’s top finisher. 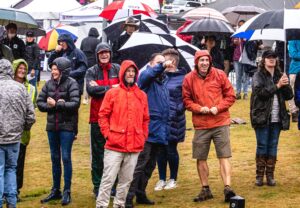 In the Women’s semi-finals, it was Canberra Grammar’s Madeline Vagg, coached by Olympian Sarah Cook, who had a tight tussle with Cook’s former school, Kinross Wolaroi. The Kinross sculler Isabella Scammell took on Vagg in the early stages of the race, however the Canberran finished well clear in a time of 8:31.32, the fastest qualifier this morning.

Hugh Bond of Ballarat Grammar also put in a strong showing for the Under 19 Men’s Single Scull, and spectators will expect to see a tight race between Bond and Scotch College – Adelaide’s Adam Holland, who was the winner of the other semi-final, in the race for the Thomas Keller Memorial Trophy tomorrow morning.

Holland looked comfortable ahead of the thrilling race for the qualifying positions; Ballarat Grammar’s Will Clarke, Sydney Rowing Club’s Gordon Applecryn and Radford College’s William Gregory just edged out University of Queensland’s Harry Nott to secure the positions in the all-important A-Final.

Laura Gourley of UTS, coached by Hally Chapman and Alex Field, put in a stellar performance in the Under 21 Women’s Single Sculll with a cracking time of 8:16.90, she finished strong ahead of Griffith University Surfers Paradise (GUSPRC) sculler Danica Free, daughter of Olympic Gold Medallist Duncan Free, who will also progress to the A-Final. Gourley later raced the Under 23 Double, with teammate Nicela Martincic, winning the older category in a commanding race for lanes.

Swan River’s Cameron Glover was pushed to the line in a delightful semi-final in the Men’s Under 21 single; Corio Bay’s Xavier Hall-Sullivan, Canberra Rowing Club’s Cormac Hayes, and Torrens Rowing Club’s Sam Button all crossing within 2.60 seconds of each other; all will progressing to the A-Final.

The following race saw heavy-hitters former Junior World Champion Cormac Kennedy-Leverett of GUSPRC lead National Training Centre (NTC), and Australian Rowing Team member, Paddy Holt of UTS Rowing Club through the entire of the Under 23 Men’s Single Scull semi-final; neither athlete looked to take the rate up through the final stages, satisfied with their row to qualify for the A Final. They will be joined in the A-Final by the winner of the second semi-final, Capital Lakes sculler Harry Glackin, a race that will no doubt be of interest to selectors for the Under 23 Australian Rowing Team.

The Open Men’s and Women’s Single Scull semi-finals saw our NTC athletes take to their individual boats and battle for spots in the A-Finals; the first of the women’s races was led from start to finish by Sydney Rowing Club’s Harriet Hudson, leading Sydney University teammates Rowena Meredith and Kate Rowan, with the final qualification spot from that race taken by University of Queensland sculler Caitlin Cronin.

The four will be joined by the top four from the second semi-final, made up of Mercantile duo Amanda Bateman and Anna Kirkwood plus with University of Queensland’s Ria Thompson and Sydney University’s Georgie Gleeson. The men’s races saw three Sydney University scullers qualify for the A-Final with NTC athletes Cameron Girdlestone, Jack Hargreaves and David Bartholot all racing well to finish top of their semi-finals.

The Open Lightweight Women’s Single Scull repechage saw a tussle between Huon Rowing Club’s Eve Mure and Adelaide Rowing Club’s Verayna Zilm in the early stages, with ANU’s Anneka Reardon on their tail the entire way through the race; Zilm led early on with Mure pushing back and leading through the 100m mark.

The Adelaide sculler charged back to lead by a second through the 1500m and stretched out to be a full boat length clear of Mure through the finish line with only 0.50 seconds back to Reardon. They will be joined by Reardon’s ANU teammate, Sophie Jerapetritis, in the A-Final tomorrow alongside the already qualified Sarah Pound and Georgia Nesbitt.

The afternoon saw more heavy rain fall as the big boats took to the water with the Under 23 Women’s Four going full pelt in their race for lanes. The seeding for lanes looks to be all important if the weather conditions prove challenging for Friday’s final; the Melbourne University crew, coached by Mitchell Nelson and Edward Fuller, had a slow start but fought wind, current and rain to post the fastest time, 7:31.32, only 0.03 seconds ahead of the Mercantile/Melbourne University composite crew. A length back saw another tight tussle for third place, the Adelaide/Swan River/West Australia composite surged forward in the last 250 metres to snap up the third place from the WA composite crew of West Australia/Fremantle/University WA rowers who finished in fourth by 0.37 seconds. 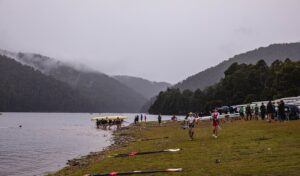 Queenwood (NSW) look like they have something to prove after missing out on the NSW Schoolgirl Head of the River title in the Eight by only 0.37 seconds earlier this year, the crew pushed through in the second thousand of their race to win the heat of the Under 19 Women’s Coxed Eight heat. Their time was the fastest of the group, though conditions were slow across the board today. Shore (NSW) posted the fastest time of the men’s crews, with Hutchins (TAS) doing well on their home turf to win their heat and progress straight through to the final with a favoured lane.

Finals begin tomorrow at 7:55am, the best of the small boats will battle to take the titles in all age and weight classes, with selectors watching the young athletes keenly as they battle to prove their talent for selection on the Underage Australian Teams. The first of the School and Club events will race in the afternoon with the School Single Sculls, Club Double Sculls and Schoolgirl Coxed Quadruple Sculls and Eights running their heats at the end of the day. Tune in on the livestream for all the action as it happens from 7:50am!