Adelaide will play host to Australia’s Olympic and Paralympic rowing and canoeing stars next month as part of a series of events showcasing these outdoor water sports.

Two rowing events and one canoe sprint event will be held in May and June, including two national championships and the Rowing Australia World Cup replica event – the last competition before the rowers head to the Tokyo Olympic Games.

The three events will bring more than 1,700 athletes, families, spectators and officials to South Australia over the next month.

Minister for Recreation, Sport and Racing, Corey Wingard, said the events would give promising young South Australian athletes an opportunity to shine on a national stage.

“The final teams are due to be announced in June (Olympic) and July (Paralympic) – with a number of South Australians in the mix including rowing Olympians Alexander Hill, Molly Goodman and Olympia Aldersey,” Minister Wingard said.

“We’re going to see the best talent, right here at West Lakes, just a month before they head to Tokyo for the Olympics – they are going to recreate their usual European lead-up events here in Adelaide, fighting hard to secure a spot on the national team.

“The regatta will see our Australian crews race each other, and will be a chance for our underage teams, who aren’t travelling overseas this year, to compete against the Olympic and Paralympic hopefuls that are heading for Tokyo.”

“This is the first time since 2014 that South Australia has hosted the Masters rowing event. Masters rowers can be aged all the way up to and past 90 years of age, and they are known to travel to events, and then stay on afterwards to explore the region. We’ve seen that before with other Masters games – lots of people enjoying our pubs, restaurants and wine regions,” Minister Wingard said.

Minister Wingard said the Marshall Government, through the South Australian Tourism Commission, had been working with both rowing and canoe national organisations to ensure the important pre-Olympic tournaments could be held – highlighting South Australia’s reputation for producing world-class sporting venues and hosting events.

Rowing Australia CEO Ian Robson said he was extremely grateful to Adelaide and the SA Government for hosting the events. 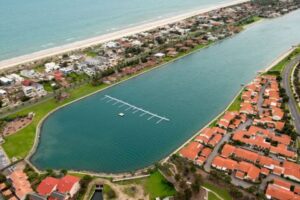 “The adverse weather has impacted water quality at the Olympic legacy venue of the Sydney International Regatta Centre, the original host for these events, and we’re delighted that West Lakes has been able to accommodate both the Australian Masters Rowing Championships (AMRC) as well as our World Rowing Cup 3 simulation regatta which features our Senior A, Para, Under 23, Under 21 and Under 19 Australian Rowing Teams,” Mr Robson said.

“The AMRC will bring Masters rowers from across the country to experience South Australia’s premier rowing venue, while June’s simulation regatta will be the last time Australians will be able to see our Olympic and Paralympic hopefuls compete on home soil before they depart into their various camps ahead of final selection for the Tokyo Games. We look forward to seeing many spectators on the banks of West Lakes watching the present and the future of Australian rowing in action.”

Paddle Australia CEO Phil Jones said the South Australian canoeing community was excited to welcome the sport’s Olympic and Paralympic hopefuls, and encouraged fans to come to West Lakes to see “some of the best paddlers in action” next week.

“We are grateful to Adelaide for being able to host the 2021 Paddle Australia Canoe Sprint Championships at short notice,” he said.

“The Canoe Sprint Championships will be the last hit out, on home water, for our Olympic and Paralympic athletes before they head to Tokyo for the Games. We have more than 890 races set to be held across five action packed days.”