Australia’s Women’s Quadruple Scull today secured a spot for the Australian Olympic Team at the postponed Tokyo 2020 Olympic Games. The crew won their final today (16 May) at the Final Olympic Qualification Regatta in Lucerne, Switzerland to book a ninth berth for the Australia in Tokyo. Meanwhile, it was not to be for the Men’s Double Scull and the Lightweight Men’s and Women’s Double Sculls who all missed out on qualification despite strong racing in highly competitive finals.

In Switzerland today, Australia’s Women’s Quadruple Scull of Caitlin Cronin, Harriet Hudson, Rowena Meredith and Ria Thompson continued the dominant performance they have shown throughout the regatta, backing up their preliminary race win with a victory in their final to secure a berth for Tokyo.

The crew, coached by Andrew Randell, led their final from start to finish to cross the line in a time of six minutes 29.93 seconds. Post-race, stroke of the boat, Cronin said, “We knew we had a really good chance. It was about executing our plan, doing all the small things right that we do in training. We are looking forward to moving forward to the Olympics. Onwards and upwards!”

The Men’s Double Scull of David Watts and Campbell Watts put in a valiant effort in their final, in a bid to finish top two and qualify for Tokyo. The duo sprinted to the line, closing in on race leaders Russia and the Czech Republic, but the crew ran out of water, finishing in third place, 1.16 seconds behind the Czech Republic.

The Lightweight Women’s Double Scull of Georgia Nesbitt and Sarah Pound needed a top three finish to qualify their boat class for Tokyo. In a challenging final, the crew finished in sixth place, with the qualification spots taken by the United States, Switzerland and China. 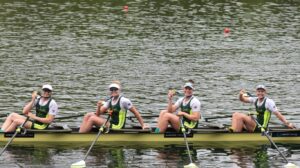 Finally, the last race of the day featured Sean Murphy and Hamish Parry in the Lightweight Men’s Double Scull, the crew needed a top two finish in their final to book a berth for Tokyo 2020. The crew, coached by Don McLachlan, took on Canada, China, the Czech Republic, France and Switzerland and, despite a strong middle thousand, it was Canada and the Czech Republic that sprinted to the line to take the two spots for Tokyo.

Rowing Australia Performance Director, Bernard Savage said, “We’re extremely proud of how all of our crews raced in Switzerland this weekend. The Final Olympic Qualification Regatta is an extremely tough event and all our crews made their finals and laid everything on the line in a bid to qualify for Tokyo.

“We’re delighted to see the Women’s Quadruple Scull qualify for the Games, taking our total number of boats to nine. Our four crews faced a tough regatta with racing collapsed into two days, instead of the planned three, due to predicted adverse weather. They have all handled themselves impeccably in what has been a challenging tour. Our athletes and staff will now return to Australia to complete two weeks of quarantine, where will offer them our full support after what has been an intense period of racing.”