It has been 15 months now since my Cancer diagnosis – Lymphoma of the bone.

Looking back on my cancer journey it was, and is, a very difficult period of uncertainty, fatigue, hope, determination, and change. 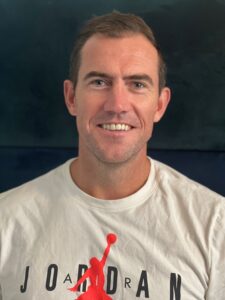 For me as an Olympian, it was very difficult to come to terms with the fact my body could not just handle this, that it needed to be poisoned to repair and that the road ahead would be long and require much patience, help, and support. The indestructible machine I had come to know and rely on over many years of competition was under fire.

But I was incredibly lucky.

Chemotherapy was successful. I was to complete a full cycle of R-CHOP chemotherapy – 6 rounds, every 3 weeks, followed by radiation.  Within 2 rounds most of my pain had subsided and all signs were looking good.

Each 3 weeks was like a training cycle – the program, focus, fatigue, pain management and preparation in readiness for the next hit out. My improvement helped to buoy my spirits, and although the remaining rounds became increasingly difficult on my body, I was able to complete the course and progress to my radiation. I likened the last round to an entirely different sport and one of the most difficult things I have had to endure.

Prior to radiation I received the news that my tumours had shrunk, and the cancer had all but disappeared – remission? I had to be told this several times before I acknowledged it. I was overcome but a part of me always worried the scan would change, but I’m told this is normal for some years.

Radiation was completed over 17 fractions and again the nurses and staff went above and beyond to make the experience pleasant.

I have now been in remission for almost a year.

Lymphoma is Australia’s #1 cancer for those aged between 15-29. It doesn’t discriminate and regardless of how young, fit, or healthy you are it can still occur – highlighted recently in the Winter Olympics and the amazing story and achievements of Canadian Snowboarder Max Parrot who won Olympic gold this year after battling Lymphoma in 2019 – diagnosed only 10 months after winning Olympic silver in 2018.

I had an incredible support team.

My wife was amazing, held it together, remained positive despite all that was happening around us and took on far too much responsibility – for which I am forever grateful. 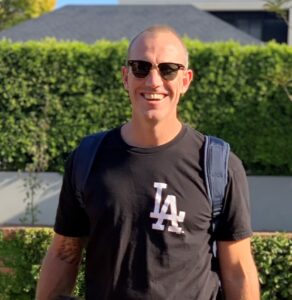 A big thankyou to my support crew – family, friends, colleagues, our rowing community, and carers. Always present, overly generous and remained encouraging throughout. Providing messages of support, dropping round coffee’s, premade meals (some of the most amazing lasagne’s I’ve eaten), or books to read. I had mix tapes (playlists) made for me that pumped me up, reminded me of the overwhelming support I had and shaped the soundtrack of my journey. Every gesture, no matter how small, was greatly appreciated and helped to ease the situation. The odds were in my favour.

My heart goes out to all those patients and families who are faced with the diagnosis and treatment, and despite it all keep smiling, enduring, and hoping. We are all behind you.

To the Olympians, rowers, cyclists, professional athletes, aspiring athletes and armchair enthusiasts alike, we need your support. Let’s band together to support those impacted by Lymphoma – patients, families, friends, and carers. Whether it be by donation, getting active or taking the time to post on your socials – every gesture, no matter how small, raises awareness and gets the word out.

Join us as we get our Legs Out for Lymphoma from the 4th -13th March.

DONATE TO FRANK’S LEGS OUT FOR LYMPHOMA CHALLENGE