At the rescheduled Tokyo Olympics, Letcher teamed up with Jack Cleary, Caleb Antill and Cameron Girdlestone to win a Bronze Medal in the Men’s Quadruple Scull.  The crew went head-to-head with the highly fancied British and Dutch crews during the A-Final and came away with the Bronze Medal.

Letcher said, “We Rowed our hearts out in the Olympic Final.  We were not the biggest crew compared to our competitors, but Australian Rowing is all about technique and tactics and we rowed a good race.  I am so proud of what we achieved.”

A Canberra native, Letcher started rowing at the age of thirteen at Radford College.   After winning many National Schoolboy titles he was accepted to the Australian National University and studied Engineering. Letcher was selected for the 2012 Australian Junior Rowing team to compete in the Men’s Quadruple Sculls.

His junior team selection was the start of an impressive international sculling career for the now 27-year-old as he went on to win a Gold Medal at the 2016 World Under-23 Rowing Championships in the Men’s Quadruple Sculls.   Due to his stellar performances at the Junior and Under-23 levels, Letcher was then selected to represent Australia at the 2017 and 2018 World Rowing Championships.  He was also part of an Australian Men’s Eight crew at the 2019 World Rowing Cup 3 Regatta, at Rotterdam (NED). 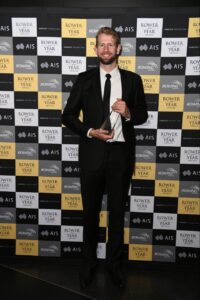 Upon being presented with the Award, Letcher said: “This is an incredible way to end my career, being recognised by my peers. It’s been incredible to be a part of the Australian Rowing Team. This last season, we made a decision, we said what we wanted to do and we went out there and did it the best we could. I’m really proud of this last year and I’m really proud of what we’ve built as a crew.”

High-Performance Director, Paul Thompson said, “We are very proud of what Luke has achieved during his career.  The world of sculling is a high-quality field and Luke has gone toe-to-toe with some of the very best.  He is also such a great role model for others to follow on and off the water.  We wish Luke all the very best in his post-rowing career, and we hope he will remain involved in our sport for years’ to come.”